How to Use GMC (Goal, Motivation, and Conflict) to Test a Story Idea

For most writers, dreaming up exciting ideas, characters, locations, and situations isn't a problem, because if there’s one thing we’re good at, it’s running our imaginations at full speed. But if we blindly run with ideas without testing our premise first, we can end up with a series of events instead of a story.

When this happens, it means a long, annoying revision road. We’ll need to unravel what ties these people, places, and events together, and use that meaning to build a story that pulls readers in and makes them care about the characters and the outcome. As you can imagine, this takes a significant amount of time, and the longer it takes to get a tale into fighting shape, the higher the chance we’ll grow frustrated, become distracted by a new idea, and move on to something else.

Burying another manuscript in the hard drive graveyard is never the goal. Finishing and getting the story into the hands of eager readers is.

The best way to avoid additional revision is to test your story idea right at the start. One of the best ways to find the bones of your novel is to use Goal, Motivation, and Conflict (GMC). This formula, discussed in Debra Dixon’s book, GMC: Goal, Motivation, Conflict, is based on three key story elements:

Goal: What your character wants

Motivation: Why your character wants it

Conflict: What stands in your character’s way

This trio is the foundation for a story—in fact, without them, there is no story. So, when you’re unsure if you have a solid premise for a novel or just a collection of ideas about murderers in the woods, a secret affair, and things blowing up, use the GMC formula as a test:

A character wants something (the goal), because of a reason (motivation), but something stands in the way (conflict).

Here are a few GMC statements you might recognize from fiction and film.

Mary wants to reach the coast (goal) because she needs safety and security (motivation), but a forest of undead blocks her path (conflict). ~The Forest of Hands and Teeth

The Grinch wants to ruin Christmas (goal) because he needs peace and quiet (motivation), but the spirit of the season makes the people of Whoville tough to break (conflict). ~The Grinch that Stole Christmas

Seong Gi-Hun wants to win money (goal) because he needs to take care of his family and pay off a huge debt (motivation), but the game he agrees to play turns into a sadistic series of challenges where losing means death (conflict). ~Squid Games

You can see how the GMC formula distills these stories to their most basic elements, and it can do the same for yours, too. Or if you’re still at the brainstorming stage, use GMC to experiment with different ideas about what your protagonist may want, why they want it, and which story-level problem presents the biggest obstacle. Try coming up with half a dozen different story premises and then choose the strongest one to build your story around.

Ready to test your story idea? 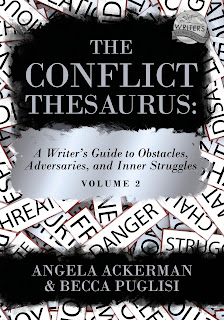 Download this GMC+Stakes worksheet sourced from the second volume of The Conflict Thesaurus: A Writer’s Guide to Obstacles, Adversaries, and Inner Struggles. It will help you plan your GMC + Stakes for your plot and character arc.

Angela Ackerman is a writing coach, international speaker, and co-author of the bestselling book, The Emotion Thesaurus and its many sequels. Available in ten languages, her guides are sourced by universities, recommended by agents and editors, and are used by novelists, screenwriters, and psychologists around the world.

Angela is also the co-founder of the popular site Writers Helping Writers, as well as One Stop for Writers, a portal to game-changing tools and resources that enable writers to craft powerful fiction. Find her on Facebook, Twitter, and Instagram.

Thanks for having me by, Alex. GMC is such a great tool for drilling down to our best story ideas!

Great tool! Thank you for sharing!

What a great way to focus on the important things in a story. Thanks for sharing.