How to Increase Your Twitter Following by Pat Hatt

So the cat is back to the IWSG shack. Or was that Pat the first time? I get so confused by these things that I may not even rhyme. Throw the other voices in and all kinds of things can take a spin. But what the heck, Pat can play as Twitter is on deck. 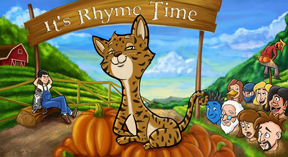 At the moment I and the cat both have over 70,000 followers and the cat has more than me, figures. Was it always that way? Nope! I must have started the account at least 5 years ago and it took a good year or more to really get up in the 10-20K follower area. After that though, it was more of an autopilot thing. People saw you had a following and they followed you just because others did. Funny how that works, huh?

Getting there was mainly just grinding out the followers. Finding ones who were interesting and following them along with some of their follower list. Having fun things to say helped a lot as well. Even if you follow people who say they follow back it doesn't mean they will if all you do is advertise or say nothing at all. Plus back then I joined in those Follow Friday things, Twitter hops, and there were a few sites with a you follow me, I'll follow you feature. I used anything to get over that hump and follower limit, as every little bit helped.

As for you getting to know everyone, nope. I'd be lucky if I know 1000 of the people following me. But what it does do is make you more lookable. By that I mean you will get more good quality followers and people looking at what you have to say because you have so many. Sad but true in many cases, especially with some random Twitter user that finds you. People tend to decide in five seconds whether or not they will give you the time of day and with a big follower number they give you five more seconds. So in that way, it matters.

Now a days I admit I just check out what is being said on my feed and things like that. With Hootsuite it is really easy to do and with Tweeterfeed I can have it set up to send out content without doing a thing. Plug in the Rss feed of your blog and other blogs and, poof, you now do nothing and all your blogs and your favorite blogs get tweeted out. Little tricks like that save a lot of time.

Now once you have bigger numbers followers come on autopilot too, as said, but there is a down side. You get a lot of the Twitter crap following you. Those guys with fake accounts and such. They follow high follower accounts in the hopes that you have an auto follow back program on your account. That way they can get real followers on their fake accounts and sell them as "real" accounts. So you have to wade through that crap to follow back the real people, at least those you want to follow back, which can be tedious.

The main thing to do is keep plugging away and building relationships. Even sending out auto blog link tweets will get you retweeted by the blog owner or by others. The more you can get retweeted the more you'll get those five seconds of being seen too. Just remember, every little bit helps. 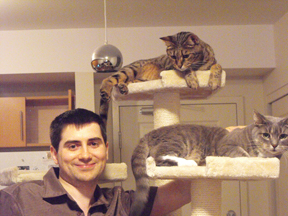 Pat Hatt can be found in the East Coast of Canada. He hates writing these things but doesn’t mind talking in the third person. He dabbles in a little of this and a little of that, not afraid to attempt something new.

He is owned by two cats, one of whom has his own blog, It’s Rhyme Time. Yeah a rhyming cat, who knew? He would be considered a both person when it comes to cats and dogs.

He is also quite the movie and TV buff. As you can probably tell does not take himself seriously and has more stuff in his head than is needed. Thus the novels as just one more form of release. Thanks for the visit and enjoy!

Twitter is one platform I need to work on more. Autopilot sounds enticing.

No problem at all. Thanks for the reminder too at my hall.

Once you get it going, autopilot makes it so easy.

Great post! I'm still in the grinding stage. My cat says hello to your cats and wants them to know the birds are singing near the window this morning. Important cat info to pass on, I guess!

Thanks for sharing Pat!

It is about building relationships and having a good product.

Great to read advice from one of my favorite bloggers. I can always use more knowledge of twitter. Thanks to Pat and the cats.

Yeah, the grinding stage take a lot, but once you get by it, worth it. Good to know there is bird tv too.

No problem at all at my hall.

That it is, met a few I never would have met without Twitter.

Lots out there one can use with twitter to automate.

That's quite a number of followers. I've been watching my FB page like numbers and they keep going backwards. Hmm... definitely not getting that one right! :)

Auto anything sounds good to me, Pat. What a great tip. Did the cats give it to you? I suspect so. Love those cats.

That is an impressive number of followers! I'm definitely nowhere near that. Thanks for the information!

Facebook is just a pain in the butt, I ignore that one.

Auto sure works, has its perks. The cats found it indeed.

Just keep on at it.

Somewhere in the far far future, someone with my name and face will understand what twitter is. Meanwhile, I'm following the cats.

I still haven't figured out the purpose of/or how to use twitter. Do I really need to know?

A Beer for the Shower said...

Well at least someone figured it out. We gave up on Twitter long ago - anything we'd post would get maybe 10% of the amount of interaction we'd get on all other social media. It brings up the age old question - if you post a hilarious cat picture and no one Likes it, does it exist?

But really, cheers! At least it works for someone!

Thanks Pat for the tips. I get crap Twitter likes every day and have to filter through them because they are collected and sold. The key is to see if they have a personal website listed in their Twitter info. If not, it's a crap account. Click it and see if it's a real website. If so, then I follow back.

Purpose really is to get in front of people and connect, but everything does that.

Yeah, there isn't a lot of interaction most of the time. The cat who was used in the pic doesn't care, they still rule lol

That is a good way to weed out the stupid crummy fake followers.

My twitter is growing slowly, but I don't really do anything, but retweet other stuff if it is somethihg I like or about writing. I tend to get 2 to 3 daily. If they have a clear description I don't check them, but if some words are not quite right, no desription or something I do not want to be associated with I don't follow back. I also periodically go back and unfollow those that unfollow me, normally those are peopel just getting you to following to up their numbers and almost immediately unfollow you, but overall mine has grown itself and is still growing slowly

nice post today even though I dont have a twitter account { and honestly dont understand what it's all about; but if it helps promote your work and helps with sales......high paws as da tabbies say }

Yeah, the unfollowers I go and unfollow too. And I don't follow everyone back either, as some are meh.

Whatever works, has its perks

I try to unfollow the unfollowers, too, but it can be time consuming - but then, that's part of grinding away at it.
70,000 is impressively amazing.
Great tips!

It sounds like you have found a formula that works
followers galore now that is a big perk...

Holy crap
70,000 plus
That's impressive
More for the puss

Wait... People saw you had a following and they followed you just because others did? So now it's cats AND sheep?
Haha I see!
In the place to be!
And I'll raise you... a Scooby Doowee!
(And I'm still impressed.)

Yep, time consuming it can be, but programs like manageflitter make it easier.

A perk it can be at my sea

The puss likes to outshine Pat.

Yep, sheep and a cat. How about that?

Hi Pat - thanks for this info .. it's something I must do ... and your insights will help .. cheers Hilary

Glad it will help out.

Your cats are adorable! I hit 10k in about 8 months, but it's been really slow going since then. I'm not really trying though, or putting out content. I'm waiting till I have things to sell, 'coz no sense spending time to write/find content, driving people to me but having nothing for them to do once they get there. I have no "call to action" yet. Need to write more books. Thanks for the post and yay for the 70k followers!

Thanks for the great post, Pat. Excellent points. On another subject, did you build the cat tower? We have one for our two cats, Marble and Shasta, and lately they've been arguing over it. Nothing too violent, but there are games going on. Long story. But one will land on top and then the other one will decide he wants up there too. Or vice versa. It's like having teenagers in the house again.

Interestingly, I don't follow people with thousands and thousands of followers because I don't believe I'll ever have a conversation with them. It's like being in a big party where you don't know anyone. But that's just me. I'm hopeless at getting my followers up, but I can see where I'm going wrong now. Thanks Pat.

haha they sure like to get the top and fight over it. I bought it, way easier than building one.

I find you can get 1000s that you don't know, but every once in a while following you do meet some fun people that you do talk to. Without following a bunch, you may never have.

Glad it is so.

Everybody lusts for Twitter's magic blue Verified badge. how to get verified on twitter

Pretty much every time I visit your blog, I have to scroll down many many comments your visitors leave before I leave my comment. So I'd say that you've done well with keeping up the relationships. Thanks for the tips!

Good tips re Twitter. It all moves soooooo fast! Hard to think anyone sees anything.