Six Reasons to Collaborate on a Boxed Set

Since late 2015, starting with a Christmas set, I've been fortunate to collaborate with several groups of writers. The books have featured themes including Christmas and Pets, Valentine's Day and Pets, Paranormal Romance and Friends-to-Lovers. 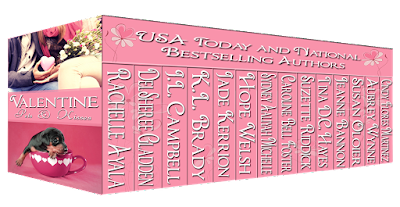 Although this form of publication is relatively new to me, it has been around for a while. I'm coming in on the tail end in terms of popularity, but there are some great advantages to being in a boxed set.

1. Expanding your skill set. I've been pleasantly surprised to find that I like writing sweet romances and have a knack for it. After learning from others, I organized the boxed set that is pictured here.

2. Working within certain word counts.  Most of my books are over 60,000 words, so confining myself to between 20k-40k words was a new challenge, which I completed successfully.

3. Learning new marketing and promotion tactics.  In each set, every writer is responsible for some form of promotion/marketing. I've become better at making teasers and coming up with ideas for visibility.

4. Exposure to new readers. Some readers like the value they get from buying a bundle of books at a great price. The pay off for writers is being discovered by new readers.

5. Boosted Amazon Author rating and visibility. With 8-12 persons promoting a set, there's a greater reach than with an author promoting a single book. Two of the sets I mentioned reached #1 bestseller status, which naturally boosted my ranking on Amazon and which author doesn't need that?

6. Greater body of work for writers. Since I've been writing novellas, I've completed five of them, three of which have been published. One will be out in June and another will be released next year.

Of course, there are disadvantages to being in a boxed set, chief of which is that the earnings have to be split based on the number of writers. However, if you aren't making the same amount as a single author, then this isn't a major problem. Also, not everybody will do the same amount of work, but with most pulling in the same direction, things do work well.

Through working on boxed sets, I've met a host of wonderful writers who have been generous with their time and skill with graphics, promotion and marketing savvy. What say you? Is this something you think you'd participate in? Why or why not?
Posted by J.L. Campbell at 5:30 AM

A boxed set is like a longer version of an anthology. Both provide advantages in terms of exposure.

Upping the rank is a good reason right there. Never have at my sea, but would be open to it I think.

True, Diane. They do.

Pat, the ranking is important and putting the set together is fun.

Great post and Tips. Maybe someone can do a post about how to be part of a boxed set find, do or join in? Where to look or how to organize one?
Juneta @ Writer's Gambit

Hi, Juneta,I've included a link to a good article about planning boxed sets. Hope you find it helpful. http://booksbywomen.org/how-to-plan-a-box-set-by-jane-davis/

Well I must say, I always thought a boxed-set is tedious...now though, you made me see advantages that weren't clear to me and for this I thank you :)

This clears up all my misconceptions about boxed-sets. Thanks, Joy. I think this is a great idea, full of opportunities.

You're welcome, Haneen. They are a lot of work, but the rewards are worth the effort.

I haven't written for a boxed set, but have enjoyed short story anthology collaborations. Its fun to adhere to someone else's criteria once in a while.

I'd definitely consider it if I could find a group of people willing to have me involved! It seems like it could be fun and a good way to grow an audience.

To me, lots of great advantages which outweigh the disadvantages.
If you're looking for exposure, then collaboration is the way to go.

L.G., yes it definitely is a good way to grow your audience and if all else fails, you could put a group together.

It does help to share the work. And the variety will probably mean your writing will be exposed to different readers.