It all started when I found myself three chapters into a book by a new author who was making the single most frequent mistake new authors make (and yeah. I did, too). It wasn’t that the writing wasn’t good. It was. Descriptive, insightful, full of life. It wasn’t that I didn’t think the story might become compelling. But it was the third chapter and nothing had happened.
I was trying to decide how much time I was going to give the author to get to the point before bailing, when suddenly the heroine steps out of a door to be met by a guy holding a gun.
Bingo. Beginning.
Then why had I already been reading for three chapters? Because the author wanted me to care about her character so that it mattered when she got into trouble. This translated into 60 pages of backstory of her family, her career, her tragic lost love, her wandering a bad neighborhood to help a child. The book opened on the way to the beginning of the book.
The first three chapters were really for the author. That was when she got to know her character, motivations, conflict. But the action hadn’t started. And especially in this day and age of frenetic media, nobody waits through the pages spent on the way to the beginning.
She should have opened the book at the gun. She could have sprinkled the rest in as the story moved along(my critique partner Elizabeth Grayson calls it Peppering the Stew). But the first thing a writer must do is to hook the reader. I call it the Indiana Jones Rule, or Write as you Fish. If you want to write a book that keeps your reader turning the pages, you should start right where the action starts, or, as one teacher said, where the protagonist’s life changes forever. You hook the reader and then slowly reel them in for the rest of the book. 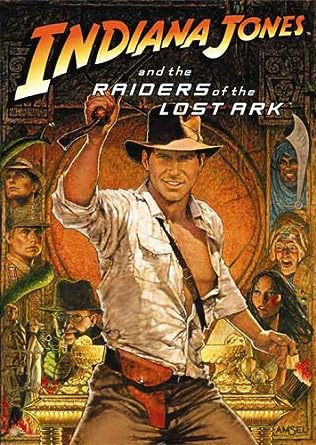 So. Indiana Jones. Think of The Lost Ark. Where does it start? Where Indie is teaching? Where he’s in his house talking to people, or in the hallway talking to the professor so we know exactly who he is by the time a big rock is chasing him? Nope. We start with the rock. What we know about Indie is that he’s handsome and cool and has a whip. And, we know his weakness is that he hates snakes(and if we’re good writers, we know those snakes will show up again later). We meet his enemy and know they’ll have more adventures.
It’s only after twelve minutes that we find out that in his real life Indie is a mild-mannered Midwestern archeology professor who is bemused that the girls think he’s cute. We see  his co-workers; we see his house. Now we get exactly why Indie was in S. America in a cave.
But if the movie had started in that classroom, we would have been bored long before the rock.

In my first novel, A Stranger’s Smile, my heroine was the heir to a great steel family who should have spent her days in glamorous idleness. But she has left all that to become a country nurse in Appalachia. I so wanted my readers to root for her right away; to know what was at stake for her. The book opened with her riding her horse back up to her cabin. It’s fall and hawks are circling, the foliage is changing, chimney smoke is rising, and she’s thinking about her former life and  how much she’s changed. How she is tired and sore from her work, but she’d rather be there. But when she arrives at her cabin, it’s to find a neighbor waiting with a telegram from her family, dragging her right back into her old world. Before she can do anything, another neighbor shows up to tell her a man has fallen off a cliff in the nearby national park, and can she help rescue him?
I had two very good friends who beta read for me. They both gave the manuscript back to me and said, “Gorgeous writing. I could really see the setting, I understood who she was. Throw it out.”
As you can imagine, I objected. I defended my heroine, my words, my  circling hawks.
“Throw it out,” they said again. “We really don’t care.”
I rewrote that opening five times, each time winnowing away more and more of the opening, per my friends’ suggestions. I murdered my darlings.
Want to know where the book ended up opening? With the line; “Ya know, it’s been a long time since I’ve had the chance to undress a handsome man.” She’s at the bottom of the cliff in the windy dark assessing the fallen man by flashlight.  The injured man is dressed like a businessman and unconscious, so he’s a puzzle. She’s attracted, of course, but she knows better.
That version of the book sold in 48 hour (it’s out of print, which is good, because the rest is in need of revision).
Hook your audience. Set up the puzzle with some action(and not necessarily guns or chases. A meeting. A confrontation. The moment of change). Give us a hint of who our character is; a hint of what the conflict is, the motivations, the enemy. Do it in the first chapter. But don’t give away all the secrets. That’s what the reeling in is all about. The secrets you hint at put suspense into every book. They make your audience turn pages to find the answers that one by one will lead them right to the black moment when the biggest secret is revealed.
One more thing. Every rule is broken. You either break them big or you follow them until you have a reputation. A classic example of this rule being broken is the movie Up. It’s genius because the very thing that makes that movie so special is what wrecks so many books. They get away with it because they’re genius. I’m not. So I followed the rules til I made my rep. THEN I broke them. Big. But then, A Stranger’s Smile was forty books ago. 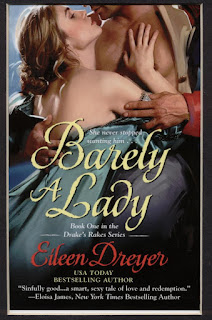 New York Times bestselling, award-winning author Eileen Dreyer  has published 41 fiction novels in most genres, and will soon publish her first non-fiction book, TRAVELS WITH DAVE, an account of the pilgrimage she and friends have been making to take the ashes of a friend around the world.

A retired trauma nurse, she still lives in St. Louis with her family. She has animals but refuses to subject them to the limelight.

Great way to look at it indeed. Sprinkle it in later and get right to it.

We need to care but we need a reason TO care, which is where that action comes in. And the sooner the better.

Awesome insight! I luv "peppering the stew." I think this is what's so hard to grasp when we're newer writers--that it's ok to throw out that getting to know the MC part. I also like to use movies to gauge where to start the action. It's really clever storytelling. Thanks for the great reminder here!

Great post. Really enjoy the examples of what did not work and what did.

Caring is a wonderful thing to do, although it is not always given back when needed, enjoyed the post,

Love the tips you've shared with us today! I plan to put the first one to use on my current WIP.
Thanks for sharing!

he he, the story starts on chapter three. Yep, that happened to me. Twice. Good to know I'm not alone.

A very informative post Eileen. Yes, those early chapters can be writers telling themselves the story. Thank you.

In HS I had an idea for a 'future world' rediscovering the past. But found myself so wound up with the ins and outs that it never got written. Yep start with a problem right away and explain as you go, where it fits. Gives the reader something to think about.

I've learned that lesson. An editor once had me redo my opening four times until I started in the right spot. I still have to cut out the start lots of the time.

Good stuff. We all slam movies for the writing but there is a masterclass in doing BIG things in with tiny opportunities. Thanks for sharing this.

"Throw it out!" Three of the most difficult words for an author to hear, but oh so helpful. Loved your post and it resonated with me like crazy.

You nailed! I always have to remind...get to the point a.k.a hook!

Great advice! In my first draft the story didn't "begin" till chapter 6 (ouch!) Starting the action earlier has made all the difference in draft two.

I have read many many books that started straight into the action; and I had no interest in the character. I think there is a very fine line between action to hook a reader into the action, and action that says something important about the character, and how that character's action sets up the rest of the story.

For me, action for the sake of action doesn't hook me to a character. I'm pretty weird in that sentiment though. Most of todays readers emphasize with the first character that is in danger. Sometimes this gimmick works for me, as a reader, but many times it does not.

As with the Indie reference, at least when the action is all over, and he returns to his mild mannered world of teaching, it is quickly related that he is an active field archaeologist, which is interfering with his professorship. I've read too many books that "hook" a reader with intriguing action, and then spend the next fifty pages with introspection, angst, and denial of the overall story plot.

A delicate balance to "hook" the reader with action and character and world development, and to continue that initial intrigue with the rest of the story.

Congrats on fulfilling that requirement with all your successful books.

Kill your darlings. We're wordsmiths so of course we want to impress the reader with our scenes and characters painting them with words so the reader will get it. BUT, you are right on about the narrative gets boring with too many colors or perhaps too gaudy! LOL..Great advice. Thanks for sharing.
JQ Rose

Yes. I still have this problem. I find the easiest way is to write those three chapters, finish the book, then throw the first three chapters away. And still I don't... not always (sigh)