Guest Stuart Horwitz: Using the Theory of the Iceberg

You have likely heard about Ernest Hemingway’s Theory of the Iceberg. In brief, Hemingway thought you as a writer should take out seven-eighths of what you know about a subject; the top one-eighth is the tip of the iceberg, what the reader reads. The catch is, the reader knows if you don’t know the other seven-eighths. Then they feel that your writing is not solid or substantive enough to enjoy, but rather just an ice floe on the loose.


Hemingway’s Theory of the Iceberg is also called the Theory of Omission. He even went so far as to believe that the quality of a piece could be judged by the quality of the material the author eliminated. That may mess with your target word count in a particular genre, but it’s more likely to mess with your faith. Can something really be gone and still be here at the same time?

I’ve seen it. I recently took a 3,000-word essay down to 1,700 words, while also adding some new material (always an option for a polished draft). I read it the other day, and I didn’t actively miss any of the good stuff that hit the cutting-room floor. What was there was everything I wanted to say.

To get there, you have to trust the process of revision, the same one that guides you to raise the best parts up a level. Those other parts, that weren’t the best parts—you don’t need them. Or rather, you don’t need them anymore. It might be difficult to part with those pieces that started a fire somewhere inside of you, and led to other discoveries that were closer and closer to the heart of the matter.

We can probably agree, though, that to do more than one draft of something is based on the understanding that we are not going to just use everything we thought of in the first place. Given this, when you embrace the Theory of the Iceberg it changes the way you view revision. You don’t have to agonize so much about whether something is in or out; now it’s more a question of whether it should be above or below the waterline.

This approach to revision takes a certain discipline. You might find yourself continually putting something back into the text, only to experience an ensuing uneasy feeling… and then remove it again. This restraint is the iceberg at work. What you are leaving is the clarity of the subject, its essence. This is no less than the difference between flow and sludge for a reader, curiosity and impatience, sparkle and doubt.

Iceberg-based decisions can cover everything from what words you use to how you understand your theme. On the most basic level, some words push other words further up towards the usable surface. You might start with some common ones that form your foundation, and then new ones arrive to rest on top of them and subsume the visible place in your text. On the other end of the spectrum, an iceberg-based approach can influence how you tackle an entire work by, say, writing the middle body of the chapters first, and then drafting an Introduction and Conclusion after what you are truly writing about becomes apparent. 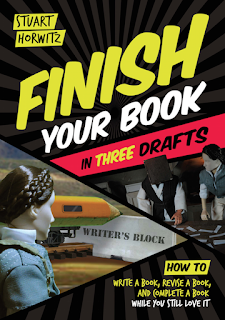 Writers can engage in iceberg-influenced preparation activities. These might include drafting a 2-3 page character study of which you only use a paragraph’s worth of words, or semi-extensive research—not to stuff what you now know into a piece—but to be able to breathe life into certain passages with the perfect detail. The maxim here seems to be, “Use it, don’t include it.”

Finally, working with the iceberg requires patience. You have to really want to create a work of art as opposed to just be done. You have to want to create something solid, complete, evocative, and powerful. I know you do, I’m just elaborating on one conception of how to get there. For my part, I can’t help but smile at any decision whereby one tone of voice, scenic twist, or structural decision is submerged in favor of one I like better—but that I would never have gotten to without what came before it.

As founder and principal of Book Architecture, Stuart has spent nearly twenty years helping writers become authors, signing with top literary agencies, sealing deals with coveted publishing houses, or forging a successful path through indie publishing. He has written three highly acclaimed books which together comprise the Book Architecture trilogy: Blueprint Your Bestseller, Book Architecture, and Finish Your Book in Three Drafts. He lives in Rhode Island with his wife and two daughters.

Posted by Shannon Lawrence at 5:00 AM

This post was so interesting to read from Hemmingway's Iceberg to editing books. Am not too keen on the editing of the books I have written, I still found a few obscure mistakes in the final book.

Have a wonderful week,
Yvonne.

True, everything that comes before creates the final product. Diving on deep down that iceberg can result in much better end product indeed, as a lot can be cut.

That is an interesting way to look at revisions. I'd say research mostly falls into that area we never see below the surface, too.

Like a painting, you want just the upper, best layers to show.

Excellent advice. If what I wrote in the first draft doesn't move the story forward and/or create a greater bond with the characters, it's gone. The odd time my finger might hesitate over the delete button. Then I highlight the paragraph/page and move on. On the next run through, having fine tuned the entire story to the end, it will be more obvious if the highlighted areas should stay or go.

I enjoyed this reminder about the theory of the iceberg. I found it easier to do this when I was writing short stories -which is why I like writing them. Now that I'm working on a novel I find that I'm going on and on a bit. I'll probably cut stuff out when I revise it and hope that it doesn't turn into a novella. Good post.

I also heard examples of an iceberg before and this one's another good example of it! Thinking of writing my own story and this one's really good to know! <3

Thank you for the wonderful post, Stuart. And for reminding me why I have always loved Hemingway. I began writing by adopting his philosophy without actually realizing what I was doing. It was back when I was still trying to find my voice. But the style has always appealed to me. Like Marilyn French's and Margaret Lawrence's work. I first learned about this theory back when one of my professors asked why some novels become classics and why some don't. Great novels change you.

Stuart has a way of making complicated things seem doable. He's an awesome workshop presenter if you ever have the chance to hear him. I have his book and it's worth the price.

A very interesting post. I love the idea of a lean cuisine approach to writing where we find the true heart of our stories.