Back to the Basics


Years ago, as a newbie writer, I thought a story had to fall like fairy dust from the sky to the page or else I was a failure as a writer. If it wasn't coming to me like magic, I was obviously a talentless hack. But then, as I rubbed elbows with fellow writers and read helpful tips from famous writers, it finally occurred to me- writing isn't simply talent. It's also hard work paired with education.

I have been the slush pile reader for several writing competitions this year and I couldn't help but think as I read the entries that there was a lot of talent in all these stories, but sometimes, something was missing. They were good, but not yet good enough. I will admit, as a writer, I cringed when that thought went through my head. I mean, I have personally heard that more times than I can count and I surely don't want to be turning into one of those people who tell writers this is good, but not good enough.

So, how does a writer go from good to good enough? Personally, I'm still studying and learning, but in analyzing the ones that didn't emerge from my slush pile, I can say it was mostly for a lack of the basics. There might have been a great voice, but the plot was weak. Great characters, but no conflict.

That's when I decided for this week’s IWSG post, I would recap what I think are the most important elements a story- for other readers and for my own better WIPs too.

1.       Conflict. Conflict raises the stakes. Without any trials for characters to face, there would be no character growth or plot arc (beginning, middle, end). But conflict doesn’t have to be Rambo-esque. Person vs. person can simply be the interpersonal frustrations of two characters (most every romance ever).  A character can also have conflict with nature (To Build a Fire), fate (Harry Potter), self (Fight Club), society (The Hand Maid’s Tale), technology (Blade Runner), or even the supernatural (It).

2.       Theme. Our high school English teachers weren’t wrong—a story needs to have a point. Be it a moral lesson or a comment on relationships or society, there needs to be a reason for someone to take the time to read the story.

3.       Characters. Duh, right? How is there a story without characters? Since that’s a given, let’s go a bit deeper. Flesh out those characters. Who are they? What’s their back story, even the tidbits you’ll never share. What are their hobbies, pet peeves, favorite color? Make them real. Add some flaws. Then make them grow (AKA character arcs). If they’re staying static, either you have a flat character who isn’t meant to inspire, or you need to dig deeper.

4.       Setting. It’s more than just the time and place. Used wisely, it sets the tone and adds dimension to the story. In my Coulter Men series, the first book is about an independent single mom who lives on an island; book two, the hero is an isolated, barren-souled man living in Montana; book three the heroine is hiding her identity and living a lie in the heart of Washington, DC.

5.       Point of View. Who is telling the story? Probably the person the writer wants the reader to most identify with. I will often shift POV from the guy to the gal to get a he said/she said sort of banter going. In order to maintain some mystery, it’s often better to hold the POV cards a bit tighter. If the reader knows every thought of every character, it could be like setting unwrapped presents under the Christmas tree. What’s the fun in that?

Those are a quick rundown of my favorite. What elements of a story do you think are the most important?

Don't forget to join in the IWSG Book Club discussion on Goodreads.
Our August/September book is Forest for the Trees: An Editor’s Advice by Betsy Lerner.
Discussion Fun Day will be September 25, 2019.
Until then, enjoy this freebie created by one of our book club moderators, Juneta Key: Story Study Checklist (Click on the link to open and then save the PDF to your computer.)

Want to try your hand at flash fiction? Enter the WEP challenge! 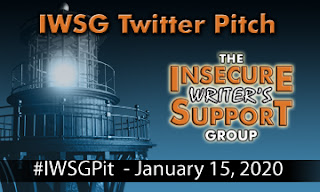 Don't forget! The Twitter Pitch is coming. Polish up those manuscripts.

Posted by Elizabeth Seckman at 5:00 AM

Great to read, most interesting. I thry to write poetry, I hated poetry whilst at school it wasn't until I wwas widowed I found I could express myself and feelings into poetry.
Have a good week.

Taking away one of those elements will definitely hurt an otherwise great story.

Great post. I agree with all your ideas about basics that make a great story.

It's important to remember these basics when writing the first draft and revising it.

It is important to have the page number on every page. Also to have a snazzy front cover.

Powdered Toast Man. Seriously. Where would a book be without page numbers? I'm shamed I didn't think of it myself. LOL

Important things to think about when writing. I think that theme can be a driving force for all of those elements.

Most competent work is good but not great.It's something I embrace, and keep striving to hit a note of greatness once in a while.

A good story is essential but I usually look to the characters first.

I struggle sometimes with the idea of character growth. Maybe that comes of writing genre fiction—it’s more about solving the problem, but maybe the every-day growth and change the characters have is enough. No great revelations in their lives, but something always shifts a bit. Maybe that need for growth is why we are so fond of budding romances in cozy mysteries.

Great points - it's always good to have those clear in our heads about our stories!