The Insecure Writers Support Group publishes an anthology of short stories each year, so it occurred to me that many of our readers might like to know more about writing short stories and what some successful short story writers have to say about their approach to this literary form. 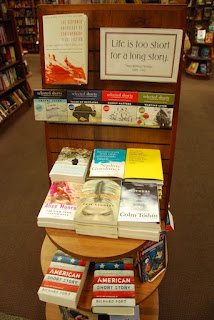 Their word count is anywhere from 1,000 to 10,000 words. They can only explore a portion of the three-act structure, and this portion must transform the main character. There’s one main character, there are no subplots, and they take place in a short period of time in one or a few settings. While they don’t have the complexity or length of a novel, they are no less challenging to craft.

Some say they’re more challenging because, in a very limited space, writers have to include a character arc, have an intriguing beginning, a compact middle, and an end that is satisfying for the reader. While editing a novel requires a lot of time and dedication, editing a short story (at least for this writer) takes proportionally the same time and dedication.

I’ve pulled together a checklist that I like to use for my short story writing, so I thought I’d share it here. The only original part of this list is the way I’ve collected the items over the years and arranged them on the page.

Before I write, these are questions I ask.

After I write, these are the steps to editing that I take.

Something a professor of literature once told me about reading short stories is to read them twice, once to find out what happens and the second time to find out the process that the writer used to create the story. Here are some excerpts from interviews by short story writers that give some insights into their process.

About his approach to writing, Chris Offutt says “The secret is to start a short story near the ending.”

Joyce Thompson has written two collections of short stories and has several pieces in the noted publication, Glimmer Train. She says to pace your story you should “…concentrate on the paragraph as a building block. Craft each one as if it were a poem…the fewer words it takes to tell [stories], the more timely they are.”

When asked “How to you know if what you’re writing is going to be a novel or a short story,” she replied, “To me, a story is a shapely thing. It’s like a circle. A novel, by contrast, is a journey.

David Long is a novelist, but he also has published a collection of short stories called Blue Spruce. He says writers have choices about how to develop a piece of material. Give it a “full scene” or summarize. They can also “account for a long patch in somebody’s life in just a sentence.” His example: And things went pretty smoothly for the next three years. However, he says, “Scene is always inherently more interesting than exposition.”

As in any writing, reading good examples is one of the best ways to improve your own work. If I could only choose four short stories, these are the ones I’d read:

A Case for Kop, Boll

A Rose for Emily, Faulkner

Thanks for sharing the tips on writing a short story. I'm one of those people who do think it'd be hard to write a story in so few words. Thanks for the tips on how you can actually write one.

Having the steps laid out like that really helps!

Hi Lee - thanks for this ... I'm not entering, but I'm sure all the information you've provided will be so helpful to the entrants: and I hope they follow the guidelines.

Thank you for the excellent tips, Lee!