As writers, we can all think back to certain stories or events that inspired us, trailheads of creative journeys we may not have even known we were on. I had one such experience at age 11, when I was drawn into the tale of a knight who sought redemption for his dark past and fought to save the world from destruction. With his companions, he traveled on flying ships and fought countless monsters, journeying to the underworld and eventually to the moon. My fingers held tight to the controller as the story unfolded in pixelated glory, synthesized music swelling with each revelation, betrayal, and heroic sacrifice.

Final Fantasy IV wasn't my first video game, but it was the first time I'd found myself caught up in the narrative of a game world. Of course, computer games had been telling stories for a couple decades before that, and they've only gotten better in the thirty years since.

Video games are a fascinating combination of technology and creativity, and they inspired me to learn computer programming in grade school. I went on to study engineering in college and worked almost 20 years as a software systems engineer. Though I dabbled with a few hobby projects, I never felt compelled enough to seriously return to my old dream of making games until I rediscovered my love for writing. After all, it wasn't just the gameplay or fancy graphics that had drawn me into those worlds!

Recently, my friend Anna 'Lavinnia' Kończak asked me to co-write a game called Poseidon's Orb. The story was already outlined and partially written when I joined the team, which included artists, musicians, programmers, and voice actors. The player takes the role of Charlotte, a singer who's been turned into a merperson and forced to steal a powerful artifact from the undersea kingdom of Aquatris.

Poseidon's Orb is a visual novel, a genre of game that incorporates a story told primarily through text with graphical depictions of the characters and setting. Background music and voice acting further enhance the experience, but the heart of the game is its narrative. Often, visual novels give the player the opportunity to make choices that affect the story. Some of these change the course of the plot, much like a Choose Your Own Adventure book, while others only affect the player character's attributes or relationships.

I was originally tasked to write a few scenes that develop the relationship between Charlotte and one of the story's love interests, King Benjamin. As the project went on, I ended up writing much more, including the entire third act and several of the story's endings. As my first sizeable game writing endeavor (the script is about 31,000 words), I learned a lot while working with a friendly, supportive, and talented team.

The writing style was a mix of first person prose and screenplay. We didn't follow standard screenplay format, but all dialogue was marked with tags indicating the character and an approximate emotion. This helped the voice actors deliver their lines with the correct feeling and the artists to create facial expressions for the characters. The programmer also referenced the markup to ensure that the game showed the correct character art for each line of dialogue. The setting for each scene was also explicitly stated (though without the standard slugline) so that the background artist could create the environments. 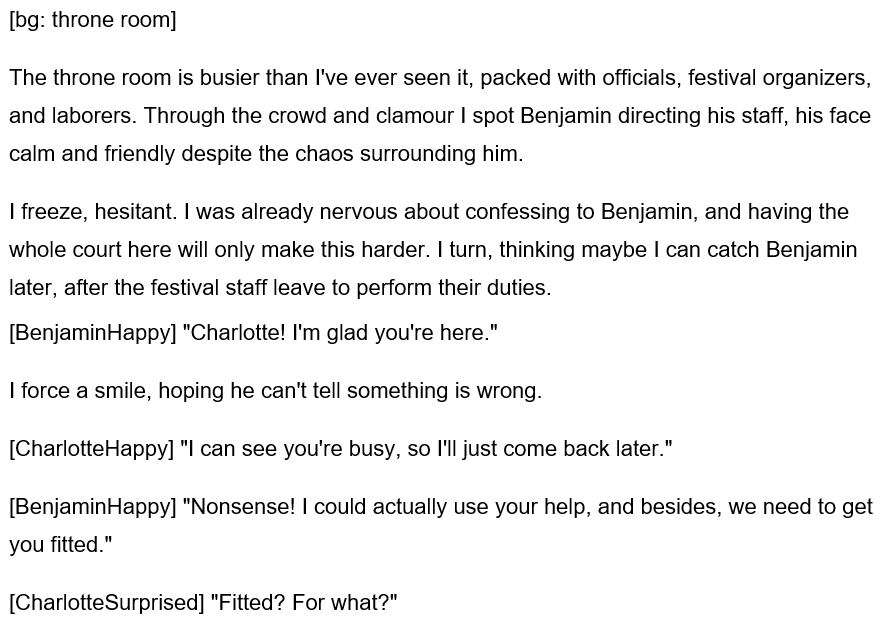 An excerpt from the Poseidon's Orb script. Note the background callout as well as character dialogue tags. This doesn't follow conventional screenplay format, but is easier to convert to the visual novel programming language we used.

Writing a visual novel first and foremost requires the same basics as writing a traditional novel: good storytelling, efficient prose, and impactful dialogue. However, the interactive medium presents its own unique challenges. Because the reader (or player) will be able to make choices, it can be tempting to explore every possible direction the story can take. However, this becomes unwieldy in a hurry. It can also lead to an inflated sense of the story's length, since the more branches the narrative takes, the greater the percent of story that is unread on any given playthrough.

Writers of interactive fiction have techniques for keeping a story manageable while giving the player a feeling of freedom. One way to do this is with scenes that consolidate a number of different branches. For example, early in Poseidon's Orb the player can choose which of the three potential love interests to spend time with at a banquet. Regardless of which conversation the player experiences, the story continues in the same way. 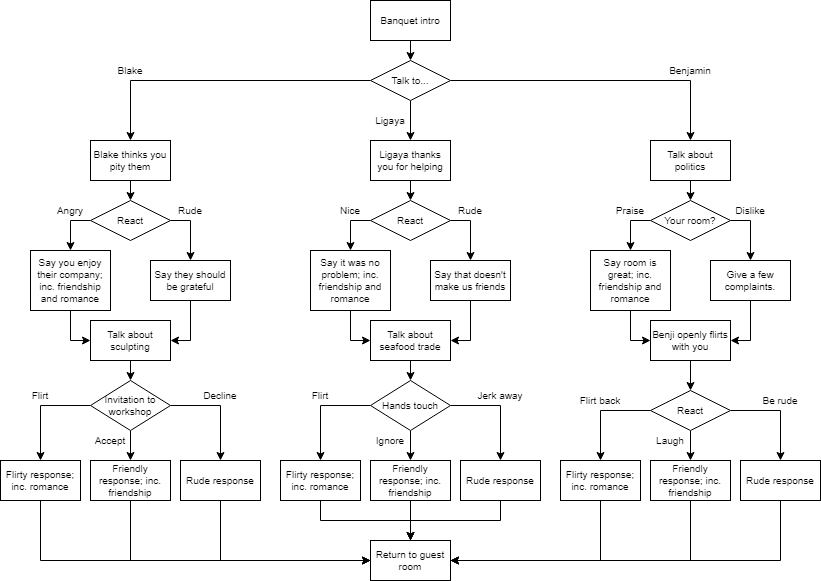 Story flow diagram for the banquet scene early in Poseidon's Orb. The player can talk to one of three love interests and choose how to react during the conversation. All three paths follow a similar structure for simplicity, and all end back on the main story thread.

Another way to create consequences from player choices is with statistics based on their actions. While this may not necessarily create a new path in the story, it might change the way an event takes place or how a particular character reacts to the player. In Poseidon's Orb, we tracked friendship and romance points for each of the three love interests, increasing the player's standing with each character based on certain dialogue selections. The primary intent was to change how conversations with each character flow, but there are a few story implications as well (if you're mean to everyone, don't expect a happy ending!). 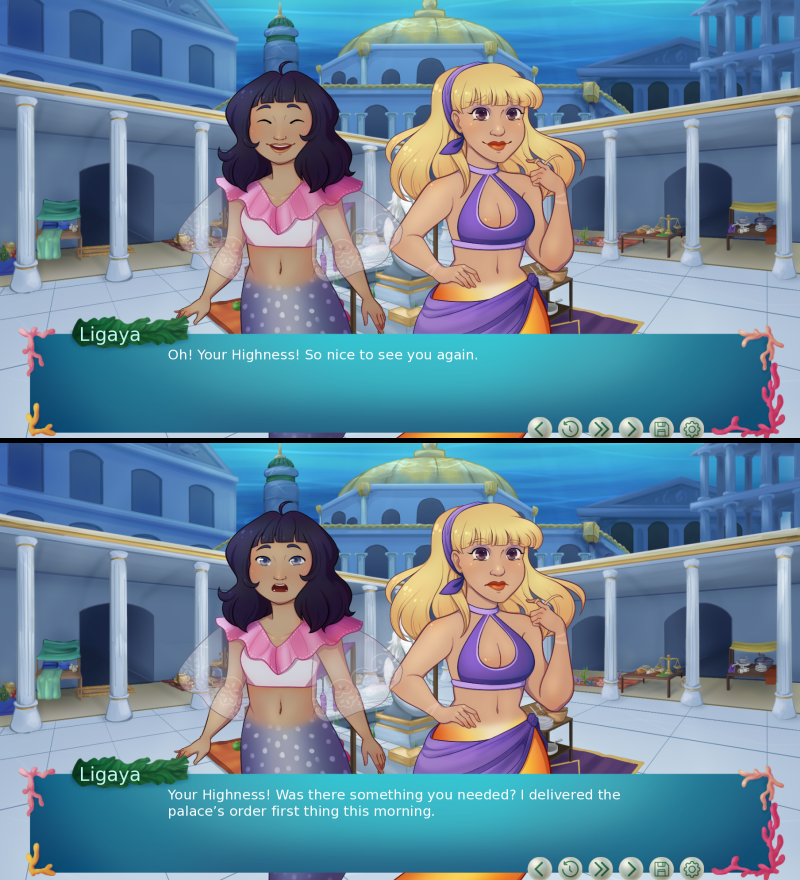 Ligaya (left) greets you differently in this scene based on whether you've been nice to her. Note that both the text and the characters' facial expressions have changed. If you've been unkind to Ligaya (bottom screenshot), you are given the choice to make amends... or not!

Visual novels aren't the only place for writing in games, of course. Most games today include some form of storytelling, whether through textual or voice narration, character conversations, item descriptions, lore documents, or movie-like cutscenes. Creative game designers and writers are always finding new ways to use the medium and evoke memorable emotional responses.

If you're interested in learning more about visual novels, I highly recommend browsing free games on itch.io (you can filter by price and genre, among other things). Aaron A. Reed's series 50 Years of Text Games offers a fascinating history of interactive fiction, starting with the original version of Oregon Trail (a text-only simulation played via teletype). If you'd like to try crafting some interactive fiction yourself, Twine and Ink are great beginner platforms, as neither requires programming skill to get started. Ren'Py is the visual novel engine we used for Poseidon's Orb. For a deeper discussion of the craft, check out blogs by Susan O'Connor and Emily Short.

Image by R. Javier from Pixabay
Posted by Elizabeth Seckman at 6:00 AM

Now writing a game would be really cool. Games often have better story lines than movies and books.

It's definitely a fun medium! And it's so accessible these days that I'd encourage anyone to try it. Twine is super easy to learn and can take you a long way into the realm of interactive storytelling.

Hi Elizabeth - it's an area I know nothing about, but realise it has huge potential for writers ... one day - I'll get to take a look - thanks for this interesting post - cheers Hilary

Thank you, Joshua! It's exciting to imagine all the places writers can find work. I know I'm not one that often thinks "outside the book" when it comes to writing.

What a challenging story form this is! I can see why people are drawn to it. Thanks for the very interesting post.