Poke A Hole In Your Bucket 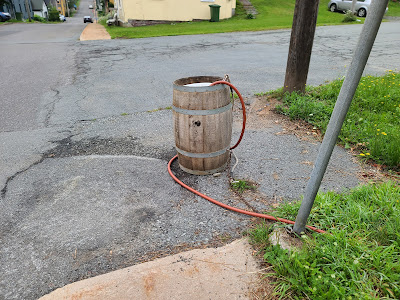 What? You're not staring at a bucket? Bucket. Barrel. Same thing. Both can hold water. Some are just bigger than the other. One is wood. One can be wood. So guess they are not that different after all. Or maybe they are different to just be different. Either way, we won't go debating the bucket and barrel scandal today. Unless of course you want to debate that. Have at it if you like. Oh! I guess barrels roll better than buckets. I got one. Point for me.
What? The points don't matter? Hmmm. That may be copyrighted. Better not say that all too loud.
Anyway, time to forget the old song of a hole in your bucket and not fix it. If your bucket doesn't have a hole then make one. I obviously don't mean this literally. Unless you are hard up for a shower. Maybe then you may want to put a hole in a bucket and dangle it over your head. There is a case for literal. Point for me.
If only the stupid points mattered. Guess everything shouldn't be made up. Guess I should get on with it. Guess I should stop saying guess. Or maybe I should say I guess and not use so many guesses and Is. Looking at that one could make Is is. Oh, how things can go.
Have I broken rules? The mold? The mould? Not that nasty mold that can poison you. The other mold. Or mould. I used both. That is bad. I'm here where they use mold, but I'm using mould. Oh the shame. Next I'll be saying neighbour and not neighbor. Meh. Tomato. Tamato.
Can you see my big hole yet? Do I need to put my foot through it to make it bigger? Not sure how you can do that with a non-literal hole, but I guess you can imagine it up. Unless you can't. If that is the case then you really need a hole. Maybe two. Okay. Foot now going through hole.
Rule is to do this. This is the ONLY way. You will never make it unless you do THIS! Never use lots of !!!!!!. Do this. Do that. Don't do that. Don't do this. This is your bucket. This is your barrel. This is all you get. Roll with it. Or walk with it if it is a bucket. One may get hard on the arms and the other the back. Stick with it though. Don't color outside the lines. Colour within them. What!!!!!!!!!!!!! You failed. You'll never make it. It's color. Not colour. No. It's colour. Not color.
Ummm. Potato. Patato?
Can you see my hole now? I bet you can.
Don't get pigeon holed by a rule or some advice. Don't even get pigeon holed by me. If you like the rules you go by then stick to them. If you don't then kick them to the curb. I know. Another idiom. Oh the horror.
Do you find any of the rules or advice you've gotten have not been good for your style? Have you ever tried to go against the rules? Did you make a hole in your bucket yet? Or barrel? Anything to add on holes? I may have said it a bunch. At least I didn't put an "An" after poke in the title. That could have gone in a whole other direction. Maybe my bucket then would be the butt of a joke. Wouldn't want to put my poor barrel's butt on the line. Not sure the clothespins could hold it.
I think my bucket officially has no bottom to it. Is it even a bucket then? Maybe we should ask the barrel. Anyway, keep poking those holes and only plugging the leaky ones. You know. That ones that want you to write a story that goes and and and and and and and and or and and and and and and or and.
The and!
Posted by Pat Hatt at 4:00 AM

Plenty of rules and holes that don't fit my style. Like don't use ly words. Yeah, take them all out and your critique partners will beg you to put some back. (And I know this from experience!)

I'll put finding the wisdom of the bucket on my list.

My head is spinning. Well, Bucket (use your imagination for what I said... Starts with an F...)

haha goes to show right there that some sure don't fit.

lol make sure it doesn't go in the barrel.

I came to this blog to return your visit Elizabeth, I used to visit Pay Hatt, he is quick and witty with words, this is in Brian's days at dVerse. It is really nice to see his name and of course Alex's.

This is Lisa at livehigh2. Don't even know how to get in my sorrect profile. Thank you Elizabeth for visiting me through Rain France's flowers.

I love breaking the rules, especially ones I know so well. Keep that bottom open at all times!

I used to drive my mother nuts because I was forever asking, "Why?" "Stop climbing trees," she'd order. "Why?" I'd ask. "Because you'll fall and break your neck." I never did stop (although I haven't climbed a tree recently) but I understood early that she was afraid for me. I wanted to understand the world she lived in. Her rules were made from fear. I know writers who live by stringent rules. I haven't but I'd like to ask them what they're afraid of.