The Hero’s Journey by Melissa Bourbon

Listen in on a discussion about story structure between authors and I’d bet a lot of money that no two people will agree on exactly one method. Some adhere steadfastly to the Three-Act Structure. Others like the Three-Act Structure on hyperdrive, broken into eight sequences. Some use the 15 beats from Save the Cat. Still others swear by The Hero’s Journey.

First, let me say that any of these work. There is no right or wrong answer.

What I also want to say is this: these story structures are essentially—at their cores—the same. In each, there is a protagonist who starts the story in their normal life, who then enters a new world, must overcome obstacles in the form of turning points, hits a climax, and ultimately resolves the conflict that has been the external driving force throughout the book.

Today I want to share with you how two of these structures intersect so you can see it. 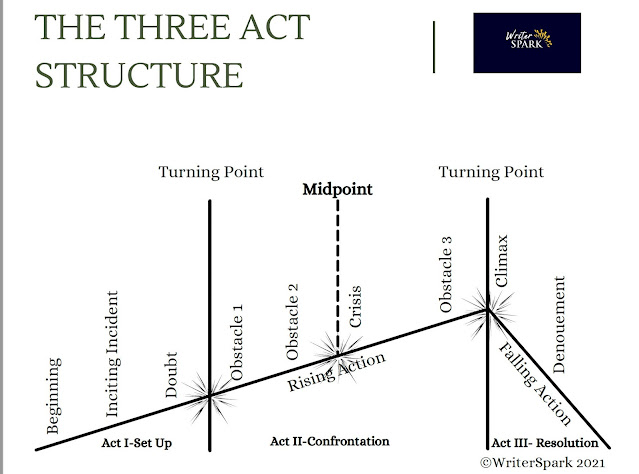 Let me start by saying what the Three-Act Structure is NOT. It’s not a formula. It doesn’t tell you, the writer, what to write or what should be happening. It’s not specific like that.

Act I shows the protagonist in his/her normal existence. Something happens to take him/her into a new world. This is Act II. A lot happens. There are turning points. Enemies are faced. A turning point leads to Act III where the climax happens, followed by the wrap up.

The majority of the book is spent getting to that climactic moment.

This is basically true in every story structure model. There is a lot of ‘two steps forward, one step back’ as the protagonist faces conflicts and works to overcome whatever obstacles are in the way of success. 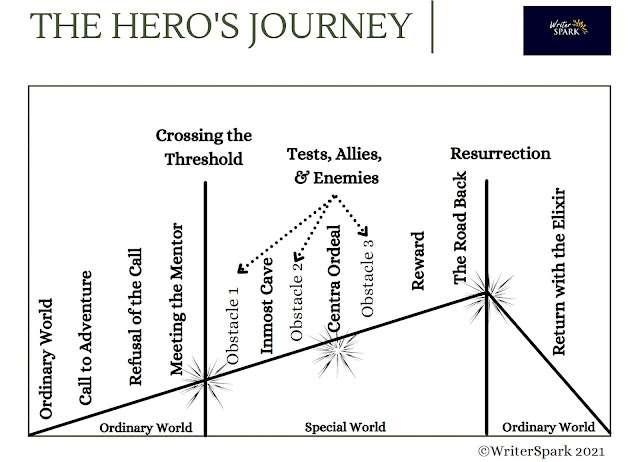 The Hero’s Journey stems from Joseph Campbell’s Monomyth, which is basically a story template in which a hero goes on an adventure, faces obstacles, is victorious, and comes back home a changed person.

Christopher Vogler, a Hollywood screenwriter and exec, used Campbell’s The Hero with a Thousand Faces and created the Writer’s Journey, which details the mythic structure for storytellers and screenwriters, specifically.

Here’s the overview of the Hero’s Journey.

Hero lives in the ORDINARY WORLD 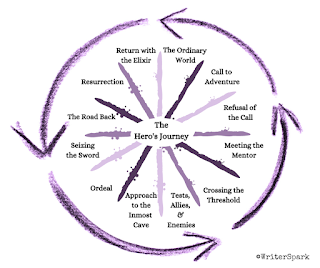 There is a CALL TO ADVENTURE
There’s a REFUSAL OF THE CALL
The hero MEETS THE MENTOR then
CROSSES THE THRESHOLD (, which takes the hero into the new world.
TESTS AND ALLIES happen along the road of trials.
The APPROACH TO INMOST CAVE tests the hero’s mettle.
The CENTRAL ORDEAL is a major turning point in which the hero experiences a major triumph. It as the midpoint.
There is a REWARD, but pysche! A new conflict arises on
the THE ROAD BACK. A turning point leads to
the RESURRECTION, which is the CLIMAX and the
RETURN WITH THE ELIXIR.

You may look at this and feel completely overwhelmed. Believe me, I get it. But let me show you how the Three-Act Structure and The Hero’s Journey look like side by side. 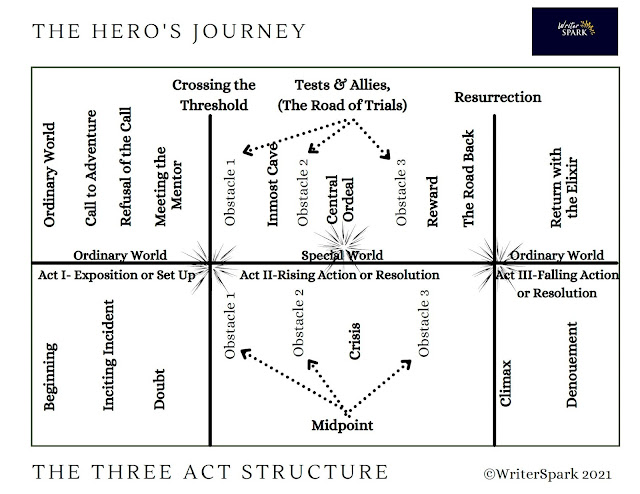 When you look at them next to each other, you can see how the core parts intersect.

The hero refuses that call. This can happen by personal choice, someone else’s choice, or through situation.

A mentor is introduced, usually during Act I, to give guidance to the hero.

A Threshold Guardian may be an obstacle to crossing the threshold.

Act I (Three-Act Structure) ends when the hero does cross the threshold (Hero’s Journey) and enters the new world (beginning of Act II).

The hero experiences success and the reward that comes with it. The ROAD BACK (Hero’s Journey), however, brings more obstacles and leads to the final turning point of ACT II (Three-Act Structure), which leads the hero to the final battle or obstacle.

The beginning of ACT III (Three-Act Structure) is the RESURRECTION (Hero’s Journey), which is the CLIMAX (Three-Act Structure). This is the moment everything in the book has been leading up to. The CENTRAL ORDEAL showed us that the hero is prepared for this battle. Failure against the antagonist, though, is still a possibility.

Finally, the DENOUEMENT (Three-Act Structure) includes the hero RETURNING to the ORDINARY WORLD with the ELIXIR (Hero’s Journey).

As you can see, both of these popular story structures is essentially the same. The vocabulary is different, but the forward momentum of the story follows the same trajectory regardless of what structure is applied.

My point in sharing all of this is to encourage you to internalize the story structure that makes sense to you.

If Blake Snyder’s 15 Beats from Save the Cat clicks for you, then use it.

If identifying the 8 sequences in your three acts works, then use that.

Maybe the broad strokes of the Three-Act Structure is enough for you, or maybe you like the more specific guidelines The Hero’s Journey takes a protagonist through.

Remember, there is no right or wrong way to write a story. My hope is that seeing how elements in story structures overlap with one another, like the Three-Act Structure and The Hero’s Journey, you can find a way that works well for you. 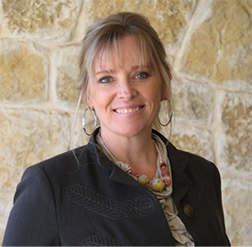 Melissa Bourbon is a national bestselling author of more than 26 novels, and is a coach, mentor, and teacher. She divides her time between writing her various series and with the WriterSpark Academy, developing and teaching courses and content to help aspiring writers—and writers who want a refresher or need inspiration—take their craft to the next level.

Find out more about Melissa here, on Instagram @bookishly_cozy, and on Facebook
And feel free to email her at writersparkacademy@gmail.com

Great post, Melissa. You're right that there isn't one right technique for writers to use when plotting their story. And the three-act plot and the Hero's Journey are very similar as you show. I loved how you showed how they intersect.

I love the hero's journey. I have also been looking at the W plot, save the cat, romancing the beat. 5 plot point, 7 plot points, the story grid way, and the story engine way---so many choices, and I see them all within each other and how they intersect. A subject I love plotting methods.

Christopher Vogler's book The Writer's Journey 3rd edition is my all time favorite book based on Campbells method--I tell people it is also a self help book. I read it and staring seeing all the ARC types in everyone I knew and in myself. Great book.

That is really detailed!

A superb post. Understanding (and eventually internalizing) the story structures delineated here is key to telling good stories. Just remember not to be hampered by such or bound in too rigid a way. Once you do it a few times, it comes naturally.

A fascinating and detailed post! Thank you for sharing, this was helpful :)

Thank you for the comments. I love talking story structure and hearing that this post is helpful is wonderful!

Really enjoyed reading this post! Thanks for spelling it out for us, Melissa! Thanks, Alex for featuring Melissa today!

Thanks Alex for introducing us to Melissa - as the others have said ... such an informative post ... cheers Hilary