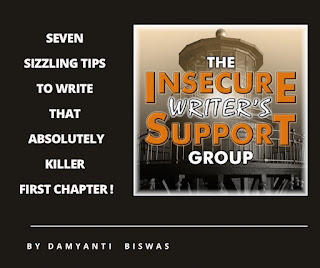 Irrespective of genre, writing the beginning of a novel is all about seducing the reader. In today’s world of easily available and multiple avenues of entertainment, a novel has to compete with far more than other novels.

You need a beginning that’ll snag the reader’s attention right off the bat.

As humans, we’re geared to find answers to questions and notice anything that is out of the ordinary. Without these two essential skills, we wouldn’t have lasted long in a pre-historic jungle. This is why stories hold our interest, why readers pick up stories to read.

Here’s how to hook their attention, and keep it:

1. Write a killer first line or paragraph.
That first line needs to lead into the second and the third.
You can either go with a big voice, active opening like: “Call me Ishmael.”
Or something off-kilter: “It was a bright cold day in April, and the clocks were striking thirteen.”
You can also set the tone of the entire tale with the first paragraph:
No live organism can continue for long to exist sanely under conditions of absolute reality; even larks and katydids are supposed, by some, to dream. Hill House, not sane, stood by itself against its hills, holding darkness within; it had stood so for eighty years and might stand for eighty more. Within, walls continued upright, bricks met neatly, floors were firm, and doors were sensibly shut; silence lay steadily against the wood and stone of Hill House, and whatever walked there, walked alone.

2. Give the Who, Why, What, Where, How.
A writing teacher I once learned from, said: While telling your story, imagine your reader has been in a coma, and that you have to orient them to what happened when they were unaware. Who are the characters? What do they want, what are they up to, and why? How do they achieve it? Where are they? Not in a journalistic fashion (though exceptions to this exist, depending on the voice of your narrator), but so that the reader is somewhat oriented in your world.
In my recent novel, THE BLUE BAR, I spend a lot of time making sure the reader sinks into the setting, all the while curious about this child-woman in a blue-sequinned saree, posing at a crowded railway station for the pleasure of a distant voyeur.

3. Raise story questions.
All novels begin with a story question that must be answered by the end of the novel. The reason beginnings are diabolically hard is because in some cases you need to write an entire draft before you know what the story is exactly about. A mystery doesn’t need to begin with murder in the first paragraph, nor a romance with a kiss in the first chapter. But most mysteries end with a dead body at the end of the first chapter.

4. Make the action and the setting vivid and clear.
If your reader is confused about what's happening right off the bat, or cannot figure out where they are, then it’s time to sit up and take notice. World-building is especially important in fantasy and sci-fi, because the world and its rules might be different than our own. You’ll want to balance this with action—even when showing the status quo, the reader will be more invested if the character overcomes some sort of challenge that presents his or her current situation, and gives enough of the character’s core to get the reader invested in it.

5. Ensure tension.
Irrespective of genre, what keeps the reader turning the pages is tension. The tension of the unknown. Something weird or slightly strange. Chemistry between characters.
Here are a few points to keep in mind to keep tension alive and kicking:
• You can have an intriguing opening, but not a puzzling one. Confusing your reader is a cardinal sin, and kills tension.
• Most good novels begin at a watershed juncture of the protagonist's life, just before everything is about to go wrong. Foreshadow that doom.
• Use all five senses on the page to give the reader a real, three-dimensional experience of the story universe.
• Make sure the action is choreographed right so that it’s clear and easy to follow. If your reader is lost, trying to figure out what happened, you haven’t done your job.
• Begin in the middle of an action--in medias res is always more intriguing than a long description of setting or character.

6. Make your character interesting.
Characterizing through action moves the plot forward--couple this with engaging the reader with the setting. This is tricky, but if you get all least two of the three going at the very outset, you'll have that hook right away. Of the three, the setting and character are crucial (for me). Once you give the reader an experience of the world they are in, and get them to care about your protagonist, they would automatically be invested in the plot.
In THE BLUE BAR, the reader knows a fait bit about Tara at the end of the first chapter and is (hopefully) keen to find out more.

7. Find a strong narrative voice.
This is the most elusive, yet the most crucial of them all. If the narrator has an engaging voice, readers would respond to it immediately. A voice gives the reader confidence they are in the hands of an assured storyteller. It’s a mixture of world-view, word choices, style, and the choice of the story that is being told. This comes with a lot of practice, and unless you’re a genius, will take a lot of rewrites. Make sure not a single superfluous word remains on your first page.

The beginning of novel is the setting up of a contract with your reader. The reader agrees to give their time to you, the writer, in exchange of being either educated, or entertained, or both.

A solid beginning of a novel sets up this contract, so you need to pay enough and more attention to get it as snappy as you can make it.

What do you think makes a great beginning to a novel? What’s your process for beginning your novel? Does your beginning stay intact through various drafts? 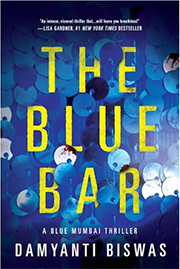 Damyanti Biswas lives in Singapore. Her short stories have been published in magazines in the US, UK, and Australia, and she helps edit the Forge Literary Magazine. Her debut crime novel You Beneath Your Skin has been optioned for screen by Endemol Shine, and her next, The Blue Bar, was published in January 2023 by Thomas & Mercer.

The Blue Bar by Damyanti Biswas
A serial killer. A missing dancer. A Mumbai inspector on their trail.
Cold-case murders in Mumbai are unearthing decades of dark secrets.
Dead or alive, he must find her. He can’t put the past to rest until he solves it.

Email ThisBlogThis!Share to TwitterShare to FacebookShare to Pinterest
Labels: 7 tips for a good first chapter, Damyanti Biswas, how to begin a story, Writing a great first chapter

All great tips for kicking off a story!

I agree with Alex. These are great tips.

That first chapter is so important as it's the first exposure to a story for publishers and agents, and it has to grip for them to take interest. After that, it has to grip the readers.

Excellent tips. I need to make a checklist...