Genetics, Research, and the Science in Science Fiction and Fantasy 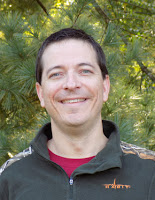 Today we welcome author Dan Koboldt, founder of #SFFpit! If you write speculative fiction and want to know about research, genetics, and the real science in science fiction and fantasy, Dan is your guy.

How did you get started writing?

I’ve been an avid reader for as long as I can remember, and always fancied the idea of writing. About nine years ago, I decided I should devote some serious effort to it, so I signed up for an “Introduction to Fiction Writing” class at the university where I worked. It focused on short stories, which are an excellent form for learning the basics of the craft. It also served to take me down a peg, because I came into the class thinking that I’d probably be pretty good at it. I’d done a lot of blogging and nonfiction writing. I figured it would come naturally.

Every student wrote two stories and provided them to the rest of the class for critique. I quickly learned that I (1) had no idea what I was doing, and (2) wasn’t very good at it. I was also the only student in the class interested in writing science fiction and fantasy, which brought its own complications when getting critiques. My first short story felt awkward to write, and proved equally awkward to read.

On the bright side, the class’s Clarion-style workshop was very good. It helped me not only improve my own work, but learn how to read others’ work critically and offer feedback. I went on to take the 202 class with the same instructor and many of the same students. We got to know one another’s styles, and watched one another improve over time. The best part is that we still keep in touch and occasionally critique one another’s work.

In class, one consistent piece of feedback I heard was that my submissions felt like a pieces of a much larger story. I figured that was a sign that I should try writing longer-form fiction. Somehow I came across National Novel Writing Month (NaNoWriMo), a crazy event in which participants try to write a 50,000-word novel in the month of November. I really found my passion with longer-form fiction. I’ve done NaNoWriMo every year since. My 2012 project went on to become my debut novel, The Rogue Retrieval.

How much and what kind of research do you do for your stories?

It depends on the type of story. When I’m writing fantasy, I tend to do more research because I’m weak on history. Topics like medieval technology, military strategy, and weapons tend to send me down the research black hole, so I limit myself. For science fiction, I’m lucky enough that my day job affords me exposure to a lot of state-of-the-art and near-future technology. I still have to do some research to fill in the gaps, but my science fiction usually comes from things I already know pretty well.

For example, I’m working on a novel about a company that designs custom-made dragons for use in the home. Genetic engineering plays a central role, so I draw a lot on my experience as a working geneticist. My job is to identify the genes that underlie rare diseases in newborns and children, so I spend most of my day trying to figure out what different genes do. That’s something we haven’t entirely figured out, by the way, since the completion of the Human Genome Project in 2001.

So, when I’m writing science fiction, the parts that deal with genes and genetic modification come easily. When it comes to differences between human and reptile anatomy, however, I need to do some legwork. Nobody’s an expert at everything. I’m fortunate to have met many experts in a variety of fields, many of whom are writers themselves, and I try to tap into their expertise when I need to.

So, you're a geneticist, eh? Are there a lot of things that you see authors getting wrong about genetics?

Oh, all the time. It’s not just authors, either: I see mistakes on television, in movies, and elsewhere in the media. The trouble is, we’re fed a lot of information about genetics (and about science in general) in our everyday lives, and not all of it is technically accurate.

I suppose the major public misconception concerns the predictive power of genetics. You know, the whole “The baby has blue eyes and Jim has blue eyes, so he must be the father” idea. Yes, children do tend to look like their parents, but most physical characteristics are what geneticists call complex traits, meaning that they’re influenced by multiple genetic and environmental factors.

Eye color is a deceptive trait because it seems to follow the basic rules of Mendelian inheritance that we learn about in high school biology: brown eyes are dominant, and blue/green eyes are recessive. Unfortunately, it’s not so simple: eye color is determined by the amount of melanin present in the iris, which in turn is influenced by at least a dozen different genes in our genome. Furthermore, I think we all know that not all brown eyes look the same, nor do all green eyes. Iris color is a spectrum, and thus it doesn’t make a good paternity test.

Incidental side note: most babies of African, Asian, or Hispanic ancestry are born with dark eyes that stay dark, while most Caucasian babies are born with blue eyes that often change to a different color after a few months. For more genetic misconceptions, you might want to read my article Eye-based Paternity Testing and Other Human Genetics Myths at Apex Magazine.

Is that why you started your "Science in Sci-fi, Fact in Fantasy" series? What are your plans for that?

Yes, very much so. Science in Sci-fi, Fact in Fantasy is a blog series in which we discuss the scientific/technological/medical aspects of science fiction and the historical/cultural/military aspects of fantasy, with help from an expert in the field. Each article addresses common misconceptions about a certain topic, and offers writers tips for getting it right.

Over the past couple of years, I’ve posted more than 70 articles by engineers, historians, scientists, and other experts. Many of them are writers themselves, and all are fans of the SF/F genre. That makes it particularly useful to aspiring authors who want to craft realistic speculative fiction. However, I think it also has broader appeal to writers of mystery, thriller, and other genres.

My plan for the series is basically to keep it going, to make it as comprehensive as possible and reach a wide audience. I’m always looking for new expert contributors, by the way. If any of you IWSG members have a specific area of expertise that you’d like to share with the writing community, please drop me a line.

Dan Koboldt is a genetics researcher and fantasy/science fiction author from the Midwest. He works for the Institute for Genomic Medicine at Nationwide Children’s Hospital, where he and his colleagues use next-generation DNA sequencing technologies to uncover the genetic basis of pediatric diseases. He has co-authored more than 70 publications in Nature, Science, The New England Journal of Medicine, and other scientific journals.

His debut novel The Rogue Retrieval – about a Vegas magician who infiltrates a medieval world – was published by Harper Voyager in 2016. The next installment, The Island Deception, will be released on April 11, 2017. The final volume is due out in February 2018.

Dan is also an avid hunter and outdoorsman. Every fall, he disappears into the woods to pursue whitetail deer and turkey with bow and arrow. He lives with his wife and three children in Ohio, where the deer take their revenge by eating all of the plants in his backyard.
Find Dan here - Website, Twitter, and Google+

The Island Deception
Available April 11, 2017
From Harper Voyager
Find it at Amazon, iTunes, Barnes and Noble, and Goodreads

WOW ! What a wondeeful interview with Dan. His books sounds so interesting and who knows what cah happen in the future with all the study of genes.

Great meeting Dan. Awesome that he can use his scientific background in his writing. And I wish I would have signed up for a writing class when I was in college. That would have helped my writing curve a lot.

I can't wait to dig into your website. Every article looks interesting. I love science and science fiction. I'm not the expert you are but I recognize many mistakes in books and TV also.
Good luck with your newest release tomorrow.

I here I thought I'd inherited my green eyes from my father. LOL There's definitely something to genetics.

A terrific interview and nice to meet Dan. His day job sounds fascinating!

Genetics sure is vast indeed, entertainment seems to go for the easy answer or explanation instead of the truth of it with most anything.

Hi Alex and Dan - great guest post ... and being able to utilise your knowledge from your day job must be wonderful ... I went to a talk on Saturday at our Astronomy Society as a guest ... where the professor is now looking at the colours in animal's eyes ... relfective qualities ... fascinating subject he used to be the team leader re searching for life (earth-like planets) amongst the exo-planets ... Colours - so interest me. Research - and research ... no wonder I don't write books ... cheers Hilary

Thank you for the kind words, all! Research gets in the way of writing for me too sometimes. You might think it's the genetics that does so, but my personal black hole is European history on Wikipedia, especially the Tudor period.

I really enjoyed reading this interview. I always appreciate speculative fiction that has a strong underpinning of real history and solid science. Thanks for letting us hear from Dan.

Writing well has many ingredients and if you forget one ore more your readers will know. Excellent.

It was a pleasure and an honor to be here. As Alex says, be insecure and proud of it!

Excellent interview!
When you mentioned the part about tv shows, movies, etc getting genetics wrong it reminded me of well ... everyone I know who has an expertise in something: my dad as an airplane mechanic and pilot griping about how planes are used in movies; my husband an electrical engineer with some time spent in EOD in the Navy complaining about the lack of basic physics knowledge and explosives in nearly every movie and show; my own odd knowledge of canoeing and kayaking - which doesn't come up often in movies (it's just not that exciting to watch). We all wish we could have a chance to say something to the technical experts in charge of our favorite entertainment. :)
Thanks for stopping by IWSG!