How to Beat Back Writer Insecurity 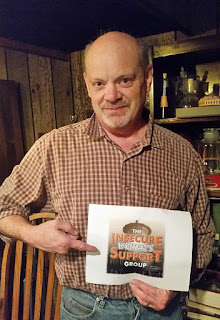 Ken Rahmoeller joins us today! The winner of the IWSG Show Us Your Writer Insecurity contest and IWSG blogging member (number eighteen on the list and still rising!), Ken agreed to tackle that very subject – insecurity. We all feel it – now, how do we deal with it?

Where do you hail from? How long have you been writing? What genre(s) do you write? Published work? What are your goals?

I’ve lived in the Midwest all my life, bouncing between Illinois and Missouri until I finally moved to Michigan after finishing my Ph.D. in chemistry. I’ve been writing fiction for about ten years, although the first couple of years were rather sporadic. My preferred genre is Fantasy, although I like to think of it as Science Fantasy. My pattern is to create a few fantastical elements for my story world and then let science fill out the resulting ramifications. It makes my worlds seem more real to me. I’m not published, probably because I haven’t finished a story yet. My goal is to finish a story, publish it, then start the process all over again (hopefully not taking ten years the next time around).

When you first began writing, was insecurity a problem?

No. My writing journey started when I began writing Harry Potter fan fiction, and back then I had no insecurities. I hadn’t heard of fan fiction sites and I don’t think Wattpad existed yet, so I never expected anyone to see my words. And even after I discovered I could upload my words to the internet, I didn’t know enough about writing to feel insecure. Who said ignorance can’t be a blessing? Fortunately, by the time I learned enough to be insecure, I was already hooked on this writing stuff, so I had no choice but to slog through it as best I could.

When did you really begin to question what you wrote? What happened to initiate that?

I was quite happy with my words for a while… until I compared them to the ones in my favorite author’s books. Especially Rowling’s books. It was clear my writing wasn’t anywhere near the level of those books, but I didn’t know enough yet to understand why. All I knew was my writing sounded amateurish next to them. So I pushed myself to understand what I was missing. I studied Rowling’s words. I read writing blogs and bought books on craft. The more I learned, the more I realized how much I didn’t know. Talk about insecurity! To be honest, if I hadn’t been hooked on writing by that point, I probably would have abandoned this whole writing business right then and there.

Before we knew the rules, we wrote uninhibited. But without those writing rules, our work sucks. What’s the balance between the two?

I’m a big proponent of “the rules are only guidelines” mindset. After studying the books of authors I respected, it was clear they didn’t always follow the rules either. Especially Rowling. I eventually concluded that much of an author’s voice depends on which writing rules they followed and which they chose to ignore. The hard part for us newer writers is deciding which rules your readers expect you to follow. Every book, every genre, every reader age group has a different expectation. Your job as an author is to figure out what that expectation is.

Back before I came to this conclusion, my mind was often paralyzed with indecision. I’d write a simple, straightforward sentence, then obsess for hours over whether it was telling or showing. I avoided finding a critique partner for years simply because I was afraid my chapters were so full of hidden telling that any critique partner worth their salt would drop me immediately. Turns out that most crit partners (and readers) aren’t nearly as worried about telling as some of the experts would have us believe. As authors, it’s our job to tell our story in a way that maximizes the entertainment value for the reader. And if that means more showing (or more telling), then so be it.

So how do we determine the appropriate amount of rule breaking? Get critique partners. Lots of them. Listen to what they have to say. Remember, the rules have reasons for existing, and you need to understand them before you break them. 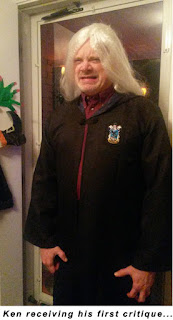 How do critique partners or writer’s groups sometimes add to the insecurity? How do they take it away?

At the beginning, attending critique group meetings made my stomach hurt, because the other writers found so many problems in my submissions. I walked into these meetings thinking my words sucked, and they confirmed it. They tried to be encouraging, but I realized I had so much more to learn, it was hard not to be depressed. But somehow, despite all this negativity, I always came away from these meetings supercharged for more writing. I wanted to dive right in and fix the problems. I kept working on my craft, and as time passed my critique partners found less and less to complain about. So now my critique groups help banish my insecurities. The moral of the story? Don’t give up.

Why do we struggle with it? Why does fear and doubt mess with our creativity?

Because we have no standards against which to judge ourselves. There’s no metric that can tell us if our writing is book-worthy or not. Writing is too subjective. Our only option is to compare our words with those of other authors, and that usually just makes us feel worse. At least it does for me. The only way we’ll ever know if our stories are good is if people like the book when it’s finished. Unfortunately, that doesn’t do us any good when we’re in the middle of writing the darn thing, and that’s when our insecurities are at their highest.

What can we do to battle insecurity? Rituals, thought processes, activities, etc.?

I may not be the best person to answer this. I have loads of insecurities about my writing, but I have one superpower that helps protect me against them. An almost child-like ability to ignore reality. I’m serious. No matter how depressed I might become after a night of crappy writing, all I need is a good night’s sleep, and when I wake, the insecurities are gone. Like magic. I don’t know how it works, but it always does. If I could bottle it, I would.

My one suggestion for battling insecurity is to create a writing space that draws you so deeply into your story that insecurity can’t follow. Much of what I write involves magic and alchemy, so my office is decorated in the style of a potion’s master lab. When I’m surrounded by flasks and beakers and tomes on alchemy, I can’t help but feel excited about my stories. 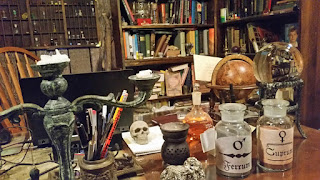 Despite the insecurities, can you see your growth as a writer?

OMG, yes. Every once in a while, when I’m stuck on a particular scene, I look back at my early writing and am staggered by how much better my writing is now. I used to be so clueless about writing. Of course, this knowledge can be a double edged sword. If I could be so clueless about being clueless back then, how do I know I’m not still clueless now? I don’t know what I don’t know, and that scares me.

Any other advice for all the insecure writers out there?

1. Find critique partners you trust, as many as you can. Join online critique groups. Get your work in front of as many eyes as possible. Listen to their feedback, even if you don’t always agree with their comments. Not only will your writing improve, but their value as a support group cannot be overstated.

2. Accept that insecurity is an occupational hazard of being a writer, and that you will always suffer from it, no matter how many books you write. That’s just how it is. In fact, I believe that being insecure is a prerequisite for being a good writer. Insecurity forces you to push yourself into becoming a better writer. Insecurity keeps you from pushing out unpolished dreck. Yeah, having to deal with the negative consequences stinks, but your insecurity is one of the best tools you have in your writer’s toolbox. Embrace it. Nurture it. Because the instant your insecurity goes away, your writing will suffer. 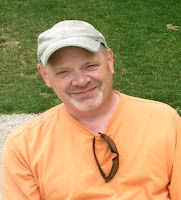 Ken Rahmoeller:
I'm a chemist living in Michigan who wondered how J.K. Rowling might go about writing another series based on the Harry Potter universe - and then decided to find out for himself.
Find Ken at his blog, on Twitter, and on Facebook.

I live in Michigan too, Ken. And started writing after reading the Harry Potter books too. So agree with you about the importance of a critique group. And everything looks better after a good night's sleep.

Great interview indeed. One sure can tell how much they've grown by looking back at older work. And yeah, rules are meant to be bent at least haha

Awesome interview! Love your advice to other writers. I totally agree that insecurity helps push us to be better. And that is a very cool office!

I love your desk, Ken. Ignorance is bliss, isn't it?

It was my pleasure to be interviewed, Alex. Hope some people take inspiration from this.

Thanks for sharing. Enjoying reading a lot.

Thank you so much for sharing all this great info with us!
Heather

Although late with my reading and writing comments this was an excellent interview. Thanks.

Nice to learn more about you, Ken. Thanks for sharing your writing journey with us. Cheers - Ellen

Being new to this site (first comment) it is nice to see we all deal with the same struggles. So often we feel we are alone in this. The bottom line is to keep going. Continue to learn the craft but most of all never lose your writing voice. For as much as I have learned I constantly remind myself that my voice, my style, cannot be shaken. If it is I am in serious trouble. Talking about insecurities is vital and it makes me feel good to see people doing just that. Excellent interview. Thank you!

Great interview, Ken! I, for one, am eagerly awaiting your first book. (No pressure!)

So much of this sounds familiar. But I have to say, I've learned most of what I know through critiques. Hard to hear sometimes, but really nice when a long time critique partner gushes over something you've written.

Agree. A great critique will make a writers day but we do need to hear the bad as well. A necessary evil in the double edge sword category.

Great interview, Ken! I still break out in a sweat when it's my turn up for critique.

Well, l this was fun. I was taken by how similar we look when reading our first critiques. Perhaps it's fashionable. That look. If not, we might have to make it that way.