The Pros and Cons of Writing Unlikable Characters 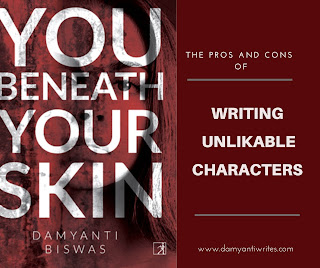 With my debut You Beneath Your Skin out into the world, I'm a newly-minted author, but in some ways I'll remain more of a reader than a writer. As a reader, the one thing I really remember about the books I've loved are the characters--be it the stubborn protagonist of The Old man and the Sea or the spirited Jo from Little Women, or the insecure, weak-minded Pip from Great Expectations.

All of them are very differently placed on the likability spectrum, and this brings us to the question of what likability is--it varies with readers. What is likable to me might just be unlikable to another reader. In general, a likable character is one that the reader can relate to, or empathise with.

There are no cons to writing likable characters, you would say and you might be right to an extent.

Here are the pros of likable characters:

1. The reader can live vicariously through their journey because they can easily identify with these characters.

2. The reader roots for the characters--maybe because they are an underdog, or have done good deeds, or are kind, or loyal, or courageous, or have a sad backstory.

1. A likable character is great while reading the book, but often not very memorable.

2. A character that begins as unlikable and ends up as likable (with a redemption arc) often stays with the reader.

3. Likable characters with small flaws may be easy to read, but a tortured, Heathcliff-like character is rewarding in the terms of long-term reader engagement. You want him to be better, you wonder at how he could be the way he is.

4. A likable character does not expand our universe--they are familiar, easy to love. A character that is harder to like, but who we do end up understanding an lovng over the course of a book makes us empathise with those who might have unlikable traits. The purpose of art is to show us humanity in all its aspects--unlikable characters show our deeply flawed, utterly human sides.

In my novel, You BeneathYour Skin, Jatin Bhatt begins as a corrupt, patriarchal police commissioner, but ends as a man who truly understands women and respects them. Anjali Morgan, an Indian American single mother and psychiatrist begins as an insecure perfectionist and grows over the course of the novel to overcome her flaws. It is tricky to write an unlikable character, or at least a character who is not immediately relatable.You have to hook the reader with the story and the setting, and make the character interesting enough that the reader is invested in them, and grows to love them over the course of the novel.

The rewards of writing an unlikable character are plenty. Readers have reported falling in love with Anjali and Jatin as their lives and relationships unravel, and caring what happens to them beyond the end of the novel.

What about you? Do you think there are any cons to not writing likable characters? How do you ensure that the readers are hooked on to the story? Have you ever read or written a character who is not likable?

You can get your own copy of You Beneath Your Skin outside of India HERE.

In India, it is available from Simon & Schuster HERE. 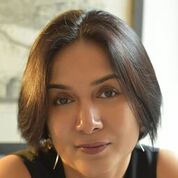 Damyanti Biswas lives in Singapore, and works with India's underprivileged children as part of Project WHY, a charity that promotes educational and social enhancement in underprivileged communities. Her short stories have been published in magazines in US, UK, and Asia, and she helps edit the Forge Literary Magazine.

You can connect with Damyanti on her blog and Twitter.
Posted by Alex J. Cavanaugh at 5:00 AM

Starting with an unlikable character who grows over the course of the story is much more rewarding.

Yes, Diane. That's the way I went with You Beneath Your Skin.

I love to see change in a character though I don't like it to happen so fast that it is unrealistic.

Unlikeable to likeable sure does stick in the mind more than just plain likeable ones.

I think it takes extra skill to write about an unlikeable character that readers will want to read about. But having them grow to be likeable can be a good story line.

Susan, yes. It is a tricky proposition to get an unlikable character to become likable.

In my novel the character Jatin Bhatt has this arc, and I had to make several changes over many drafts to get his journey right.

He starts off as very patriarchal and corrupt and is slowly but surely transformed.

Pat, yes. This is also the case in romance novels where an unlikable protagonist slowly transforms to a likable one.

Natalie, the trick is to make them unlikable but fascinating--give them aspects that readers can identify with, along with those they can't.

The rewards are worth the effort.

Hi Damyanti - your book is excellent and I am really looking forward to finishing it - I'm really hooked ... the story line has totally gripped me. And I know I'll learn so much about life in India ... that is reflected in all of us and (worse of all) happens in all countries around the world.

I much prefer the Mr Darcy's of this world ... once they've sorted out their own misgivings and characters and become decent humans again! I am so looking forward to finishing yours ... next week: latest - cheers and so well done again - Hilary

My critique group always say they don't like my protag. I have a hard time making likable characters. Not sure why, but I have to make a conscious effort to make them nice.

Some unlikable aspects enrich any character. But loathing a protagonist only works in the most literary fiction, because readers of commercial fiction do not yearn to understand someone deeply so much as to hang out with someone they enjoy hanging out with :)

My favorite unlikable character is Scarlet O'Hara from Gone with the Wind. She's such a...well, she's not likable. But you respect her. She is always Melanie says, vivacious and spirited.

Hilary, that's so kind of you to say. thank you so much. Mr Darcy was one of my favourite characters growing up!

K J Scrim, an unlikable protagonist is not a bad thing--the only sin a writer can commit is to have a protag who is not interesting. As long as your character is interesting,no matter how unlikable, you have a winner.

Mirka, I agree with you. It IS hard to make a commercial fiction character unlikable, yet intriguing. The secret is to have a intriguing character either because they're layered, or show some human vulnerability or a solid good quality amidst a host of bad ones. Once a reader is engaged with a character (even hating him/ her), it is easier if they're bad in some way, and make a journey towards the good--a proper redemption.

I am working on making my characters less full of sunshine - it's hard! :)
I love how your characters grew throughout the story - so many interconnecting webs and storylines. So well done!
If anyone hasn't read it yet, it's a powerful read!!

How about a likable character that becomes unlikable? Does that happen?

Vincent Price (yes the actor) said it was more 'fun' to play the 'villain' than the hero as the hero's character is always the same no matter what story, but the villain is a villain in different ways for different reasons. Not sure when I heard him say this, but it has stuck with me forever!