Everyone knows that a hero is the most important character in a novel… Or are they? It’s actually a common misconception because at the heart of all stories is change, aka the emotional arc the hero moves through. From ‘flawed person unable to defeat their obstacles’ to ‘heroic champion at the end of the book’, having overcome their issues. And driving that change is conflict, and who creates conflict…?

That’s why the villain is JUST as important as the hero. It’s also why I spend as much time crafting my villain as I do crafting my hero. So here are four tips to creating sinister villains.

Humans do things for a reason, often because of past experiences and the emotional wounds we’ve gathered. For example, losing a limb or a loved one dying. These events actually shape our brain chemistry and change the way we see the world. They cement the way we make decisions meaning rational thought can plausibly leave a villain and they can do something immoral because that’s what experience has taught them.
The Lion King is a great example of this. The King, Mufasa, has a brother called Scar who grew up in his shadow, always second best. As a result, Scar becomes bitter and jealous. In his mind, he deserves the crown. Therefore, anything he does to get it is reasonable. His jealousy is the reason why there’s conflict, and that conflict over the crown drives the story.
2.      Positivity is King

It might sound odd to ask you to give your villain a positive trait, but positivity for villains leads to believability. Just like having a perfect hero is off putting (because no one is perfect in real life) having a purely evil villain is also unbelievable. In a villain’s mind, they’re the hero of their story, they don’t think they’re evil, so chances are, there’s something redeemable about them.

You could show them caring for a sibling or family member, or show them loving a pet. You could even turn their negative trait into a positive one temporarily. Showing some positivity will breed a much more complex villain who’s an awful lot more believable than one who’s 100% nasty.

A story with a hero who gets it easy is boring. Nothing is a challenge, the obstacles fall away. That’s not going to grip your readers. What grips them is relating to your hero’s emotional journey and the trials and tribulations he faces. That means he needs to work hard for his win. He needs to defeat a huge villain shaped barrier that seems, for 85% of your novel, like it’s totally insurmountable.
How do you make the villain seem undefeatable?
Make your villain an expert at something — if your villain is an expert in amassing huge armies, your hero is going to struggle to gather a rabble of misfits big enough to defeat him. A good tip here is to link to your hero’s character arc to your main villain-barrier. For example, Thor from the Marvel universe movies is (at the start) arrogant and selfish. So his father curses Thor’s magical hammer—the only hammer that’s able to defeat the villain. Until Thor can change and prove himself worthy of the power the hammer wields, he’s royally screwed. Once he changes, he gets the hammer back and can defeat the villain.
4.      Consider a Twist
Once you’ve finished the first book in a series you could play a wild card and consider a villain redemption arc for the next book in your series.

A character arc defines the change a character goes through during your story. Typically, a villain will spend the entire plot descending into villainy, where eventually they’re defeated. But a villain on the path to redemption goes the other way, they climb their way out of villainy to redeem themselves.

A word of caution though:

It takes time. Just as a hero takes an entire novel to overcome her flaw, it will take some time for a villain to make this monumental change. Don’t let them yo-yo between good and evil — the change needs to build slowly throughout your story.

Foreshadowing is vital. Readers don’t like to be cheated. You need to drop breadcrumbs throughout your story to let your reader know subconsciously that the villain is going to change, otherwise, they’ll feel cheated. Foreshadowing is subtle and often doesn’t take a lot — the occasional soft glance from the villain, a nicely spoken sentence, an action that is ‘good’ rather than evil. Tiny clues are key here.

Like hero like villain. Don’t make it easy for your villain to change. Just like it’s hard for the hero to overcome her flaw, it should be hard for a villain to overcome his. A quick way to make it harder for the villain to redeem himself is to catch him between two of his values. For example, while this character isn’t a villain, it still illustrates the point: Ned Stark in Game of Thrones values loyalty and wisdom – his wisdom tells him if he helps his King it will inevitably lead to his death, and yet, his loyalty forces him to help the King anyway.

Don’t let your villain become a wuss. Villains are villains for a reason. Keep them authentic by retaining some of their sharper personality edges. Just because their actions are good doesn’t mean the whole of them will be. 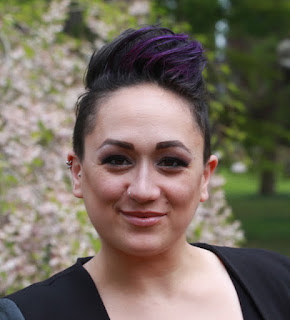 Sacha Black is an author, podcaster and developmental editor. She has five obsessions; words, expensive shoes, conspiracy theories, self-improvement, and breaking the rules. She also has the mind of a perpetual sixteen-year-old, only with slightly less drama and slightly more bills.

Sacha writes books about people with magical powers and other books about the art of writing. She lives in Hertfordshire, England, with her wife and genius, giant of a son.

When she's not writing, she can be found laughing inappropriately loud, blogging, sniffing musty old books, fangirling film and TV soundtracks, or thinking up new ways to break the rules.
You can find her at these links:  Website ~ Podcast ~ Facebooks Group

And she has books about both! Cool.
I've never had an actual person be a villain in one of my books. The villain has always been a situation. Maybe it's time I tried an actual villain.

The villain always believes he's the hero which is why he needs just as much backstory and motivation as the hero.

do love the smell of old books... nice article on the character of Villains

Thanks for sharing your tips. I agree that villains have to have a reason for what they do to be believable.

Alex, you should definitely try a real villain, they're super fun to craft :D

Thanks Dr. Theda, glad I'm not the only one who likes the smell!

Wonderful article with inspiring tips. Thank you for sharing with us today.

Great tips indeed. The villain does always think they are the hero. Have to get that foreshadowing in too.

Excellent points, Sacha. Thank you for the clarity.

Very relevant points. After a point a protagonist can only shine if the antagonist is well developed.

I do enjoy a good bad guy, or gal!

Interesting information and perfect examples. Thank you. In real life I have villains I see everyday, but some days they can be kind. You are so right about sharing a villain's softer side.