I’m a bilingual author from Germany and I learned many things the hard way. One of my biggest obstacles was (and still is to some extent) my tendency to write lean. I do not much care for lush descriptions. Why use 20 words if 5 will suffice? The reason is quite simple:

Reading is the only known way of thought transfer. Sure, it’s a buggy process but it works if (yes, if) the author knows the difference between show and tell, and description plays a major role there.

As a child, I loved the books of an author who lived in the middle of the 19th century. His stories were adventurous and had deep meaning. However, I skipped whole pages due to big blocks of descriptions. I wanted the action to keep moving. So when I began writing in earnest, I left out descriptions wherever possible.  Either extreme is wrong.

In a blogpost on this site in October, Rayne Hall has already given you some pointers at how you can make your descriptions more engaging. Use your scene character’s POV to your advantage.  You can reveal or hide facts you’ll need in later chapters by mixing them into well thought out descriptions. You can also use description to characterize your POV character or characters the POV character interacts with.

Example: “How I hated the smell of his car. The scent of cold cigarettes, french fries, and stale beer made me gag, but I had no choice. If I wanted life to continue, I had to sit in his grimy VW bug where a mass of mingled rubbish had overtaken the backseat. There were scientific papers, sheet music, food, empty beer bottles, some records and even a guitar with ripped strings and a coating that must surely be a century’s worth of grime.”

Right here, the description is only there to set the scene, the reader thinks. But later on, when the young detective discovers that all murder victims have been strangled with a guitar string, this scene gets a whole new layer of importance.

The key to great description is the use of specific details. Rayne Hall has already shown how different the perceptions of your characters should be, depending on their jobs, their hobbies, and life experiences. But even with that foundation, the choice of detail is crucial.

Why does the architect notice this house rather than the one next to it? Does he really notice the whole house or is it the contrast of the blooming geranium in the cracked pot against the once yellow sandstone that symbolizes the district's downfall to him?

It is also important to keep in mind, what the POV character is doing in the scene you’re trying to describe. Naturally, a thief fleeing from the police will not notice how lovingly cared for the garden looks that he’s passing through. He’ll only be on the lookout for the gate or a place where he can jump the fence or a hiding place. While an old widow visiting her late husband’s grave might point out to him in minute detail what has changed on the neighboring graves since her last visit.

Description should also use all senses if possible. Our normal modus operandi is sight, which is why most of our descriptions center around things we see. But we’ve also got smell, hearing, feel, and taste (which is pretty hard to put into story but not impossible). And some people claim to have a sixth sense, perception.

A final consideration is your genre. Description can be used very well to set the tone of your novel. Description in a gritty detective story will focus on different elements in the scenes and a different, more chopped up writing style than a chick-lit story with its fluffy, feel-good descriptions. The genre also determines the amount of descriptions you need.

Readers of Romance expect a lot of sensual descriptions mingled with strong emotions whereas Horror works with the unseen in complex settings. A heavily tech-oriented SciFi story will need more expository description (beware the pitfall here) than a coming of age story set in the real world.

Make your descriptions as varied as you can, because description is what makes your stories become a movie in the readers’ minds. Skimp on it, and your stories will fall flat no matter how engaging the characters and how intriguing the plot. Put in too much, and the reader will skip paragraphs or even whole pages.

Play Along:
Describe your room twice. The first time, pretend to be a mother fetching laundry from her son’s/daughter’s room. And second, pretend to be an alien that crashed through the window of this room, so this is the first glimpse of humanity it gets. Keep it under 100 words.
Feel free to post, and I’ll do my best to comment. 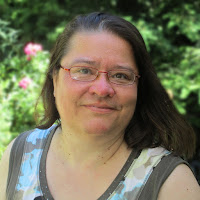 Katharina Gerlach is a bilingual author from Germany, married to the best man on earth, mother of three, grandmother of one and proud owner of a Husky-Australian Sheppard mix. She writes Fantasy (Fairy Tale Retellings, Urban Fantasy, Historical Fantasy, and more) and history-centric stories of varying lengths with the occasional Real World (TM) short story thrown in. Recently, her story “Winter Days” was accepted for the ISWSG anthology “Voyagers - The Third Ghost”. It tells one of the adventures she had when visiting East Germany with her family as a child.
You can find her on her website, on Facebook, or Pinterest. Reach out and she’ll get back to you asap.
Posted by Juneta key at 5:00 AM

I bet you skipped the same stuff in Tolkien's books that I did!
I'm also a bare bones writer and have to add a lot of description later. I've gotten better about using more senses, even in science fiction. (And I've found things like sand that can affect all five senses!)

Description is a great way to drop hints. The setting can even become a character in the story.

Thanks for being our guest Cat. Great tips. Insightful post. Loved your description example. I will have to think about that exercise may come back later when time and do a description post.

Cool, although personally I wouldn't eat sand. Did that once and the results were rather unpleasant at the other end later. :D

It can be used for so many interesting things, the article could have been three times as long.

Thanks for having me.

I'm a lean writer as well - and prefer reading lean texts as well. While I adore Tolkein, I did skip some of those bits too - poor Tom Bombadill especially :)

I never liked Tolkien all that much, probably due to the translation I read. I gave up after 3 pages of an endless poem at the end of the third LOTR book. That just was the last straw.

What a fabulous distinction! I know I'm writing a ton of description myself- I mean, the books are very long and I know it's not action! But you've hit a great note here about how to change perspective and also how to make a descriptive detail serve double-duty.

You always handle it so well, I barely notice the description.

Excellent points! I love your writing exercise, too. Currently I am blogging via phone so I will have to try that exercise later.
Thanks for posting, Katherine!

When I think description-King, I think James Michener. But I know a lot of readers who've complained that Mr. M's descriptions go on too long. Hard to please everyone, I suppose. Thanks for the great pointers, Katherine. There are some awesome tools here.

Genre sure plays an important part indeed. But yeah, I was guilty of having them go on too long back when.

@Tyrean: I'm glad you like the exercise. I hope it helps you.

@Joylene: I've never heard of James Michener. What I found is that the younger the reader, the less they like lengthy descriptions, no matter how well written they are. I think that's a pity, but it's getting mroe and more common.

@Patt: As long as description serves double duty (like showing us a character's way to think and it's attitude), it's not too long.

Thanks for reminding me about the senses, I've written about this on my blog and over time I've let myself slip into the darkside but thats sci-fi. Admiral Star crushed his cigar between his fingertips sounds better than smokey put out his ciggy in the ashtray. I guess, haha although the latter is funny.

The more I read the more I love books with lots of description. I'm a fantasy reader and love to be immersed in the world for a very long time. I want to see everything there is to see. Robert Jordan's books did that for me as well as Brandon Sanderson. I was a bare bones writer too and I've come to realize the audience I want to write to is just like me so I've been having to slow down and make my fantasy worlds visual.

I have to go back and add some description too. The setting is a great way to add dimension and symbolism.

@Spacer Guy: You can easily add more senses to your example. "Admiral Star crushed his cigar between his fingertips" and suppressed the twitch of his lips ad the pain lancing through his nerves. His life depended on bluffing. The last whispers of the smoke's scent drifted up to his nose, filling him with determination and reminding him there was even more at stake than his own life.

@DLGardner: However, making it visual doesn't mean to overdose the reader with great description. It means interweaving action and description in a way that keeps the reader wanting more (aka turning the pages). Good luck.

@Elizabeth Seckman: I've learned that it's so much easier to include the description right in first draft, but going back and fixing it is an option too. Good luck.

Here's a great description:
Seventh-Heaven for eternity,
never the same ol, same ol.
Dijoo like that description?
HeeHee
Join me Upstairs, miss gorgeous,
and I promise you aint
nthn like turning-the-pajes, dear.
Why? We'll be literally in them,
surrounded by a vast eternity of
delightful infinity, never growing
dimmer or less captivating. How
do I know? Im a NDE. Cant get any
moe axiomatic than that, Curly.
God bless you, girl.
Cya soon Upstairs.
I. Love. You. Two.

Thanks for sharing these tips. I started out writing for newspapers which only want the bones of the story--not too long or the paper will cut it to have room for advertising. So I'm guilty of not enough description. I'm working on a memoir and kind of forget that not everyone knows my mom or my nemesis, so I need more physical descriptions added plus settings. Love the exercise. Sounds like fun.
JQ Rose