Every writer’s mission is to pen a story that draws readers in, offering familiarity when it comes to certain genre expectations while also delivering something fresh so to be distinctive and memorable. This is how to cultivate a loyal--and, fingers crossed, rabidly obsessed--reading audience.

But heck, there’s a lot of stories out there. And didn’t someone say there’s only so many plot forms to choose from? Is “fresh” even possible?

When you know where to look, you can find a kaleidoscope of unique ideas and apply them to any type of story to transform it.

One of the easiest ways to offers that thrill of “newness” for readers is to activate the power of conflict. In fiction, it is the crucible that tests, bruises, and shapes our characters. Externally, it pushes the plot onward by supplying the resistance needed to force characters to scrutinize their world, make choices, and take action to get what they want. Internally, conflict generates a tug-of-war between the character’s fears, beliefs, needs, values, and desires. Ultimately, it forces them to choose between an old, antiquated way of thinking and doing, or a new, evolved way of being, because only one will help them get what they want.

Conflict touches everything: plot, characters, arc, pacing, tension and more, and can be endlessly adapted to generate fresh scenes, and scenarios that provide readers with something special to experience.

The other beautiful thing about conflict is how you can find it anywhere: the character’s career, relationships, duties, etc., or it can come from adversaries, nature, the supernatural, or even from within themselves. And that’s just to start.

But no matter where your character is and what is happening, there’s one eternal source for conflict that can always lead you to a complication, obstacle, or blocker to clash with your character’s goals: the setting.

The location of each scene will contain inherent dangers and risks, meaning you can mine those to create problems and remind the character of the cost of failure. Drawing conflict from your setting also gives it a greater role in the story. Rather than be a “stage” for action to unfold, your setting becomes a participant.

Here are some things to keep in mind to draw the very best conflict from your setting, making important story moments more intense, and offering that fresh gauntlet of challenges for your character to navigate.

Some setting choices are obvious. If you need your character’s car to break down in an isolated area, then a country road, campsite, or quarry might do the trick. But conflict very often happens in an ordinary setting, like a retail store or at home. In cases like these, when the story has dictated where events will occur, up the ante by choosing a specific location that holds emotional value for your character. Instead of choosing just any store, pick one with an emotional association—such as the place the character was caught shoplifting as a teenager. Good or bad, any setting that plays upon their emotional volatility will increase their chances of saying or doing something they’ll regret.

And while we’re talking about emotional value, don’t underestimate the symbolic weight of the objects within the scene. The backyard may be a generic place to have a difficult conversation but put the characters next to the treehouse their son used to play in before he got critically sick, and you’ve already heightened their emotions, potentially adding additional conflict to the scene.

It’s also important to think about which settings contain infrastructure that will make the character’s goal harder to reach. Maybe it’s a ravine the protagonist will need to cross, a locked door to get through, or a security guard to evade. Remember that the character's journey to achieve their goal shouldn't be a walk in the park. Conflict is necessary in every scene, so choose settings that contain obstacles or provide poignant emotional roadblocks. 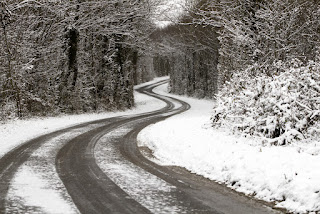 Think about how conflict naturally evolves. The character has an objective. They put together a plan and start pursuing that goal. Then complications come along and make things interesting. Luckily, there are lots of ways we can manipulate the setting to create additional conflict scenarios.

Mess with the Weather. Unexpected showers, a heat wave, an icy driveway, the threat of a tornado—how can small and large weather considerations create problems for your character?

Take Away Transportation. No matter what setting you choose, your character will need to move from one place to another. What kind of transportation disruptions will make it harder for them to get where they need to go?

Add an Audience. Falling down in private is totally different than doing it in a crowd of people. Both may be physically painful, but the latter adds an element of emotional hardship. Who could you put in the environment as a witness to the character's missteps or misfortune?

Trigger Sensitive Emotions. Conflict is easier to handle for an even-keeled, emotionally cool character. So use the setting to throw them off balance. If they're struggling to put food on the table, place them in a locale where wealthy characters are eating lavishly and throwing away leftovers. Likewise, a character with daddy issues can be triggered in an environment that highlights healthy and loving father-daughter relationships. So when you’re planning the setting for a scene, ask yourself: What could I add specifically for my character in this situation that will elevate their emotions?

Exploit What They Don’t Have. If your character doesn’t have a light source, place them in a dark place, like a cave or deserted subway tunnel. No weapon? Surround them with physical threats. If they're lacking something vital, capitalize on that.

Make Them Uncomfortable. Vulnerability sets the character on edge and elevates their emotional state. So whenever you can, put the character in a location where they have no experience, don’t know the rules, or aren't really suited to navigate it. This can work for small- or large-scale settings, from a character who has to traverse an alien planet to someone who's averse to kids having to host a child's party.

Use Symbolism. Nothing impedes progress like fear and self-doubt. Think about which symbols can be added to the environment to remind the character of an area of weakness, a past failure, a debilitating fear, or an unresolved wound.

Add a Ticking Clock. One sure-fire way to up the ante is to give the character a deadline. Instead of them having unlimited time to complete the goal, make them dependent upon elements within their environment, such as having to avoid rush-hour traffic, reach the bank by four p.m., or get home before sunset.

Setting-related conflict is fantastic in that it can be endlessly adapted, helping you keep the tension going in every scene no matter where your character is.

Want More Ideas on How to Unleash the Power of Conflict? 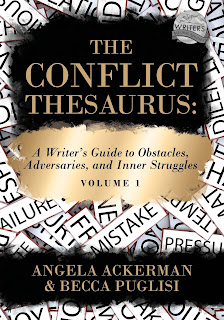 The Conflict Thesaurus: A Writer’s Guide to Obstacles, Adversaries, and Inner Struggles (Volume 1). It’s packed with ideas on how to apply meaningful conflict to reveal your character, challenge them, and keep the story tense and on track. It also digs into a plethora of conflict scenarios to help you plot fresh scenes. 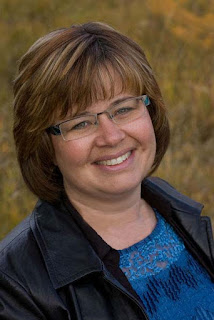 Angela Ackerman is a writing coach, international speaker, and co-author of The Emotion Thesaurus: A Writer’s Guide to Character Expression and its many sequels. Her bestselling writing guides are available in eight languages, and are sourced by universities, recommended by agents and editors, and used by writers around the world. She’s also one half of the popular site, Writers Helping Writers, and co-founder of One Stop for Writers, a creativity portal loaded with one-of-a-kind tools, resources, and a Storyteller’s Roadmap that makes planning, writing, and revising a novel almost criminally easy.
Posted by Alex J. Cavanaugh at 5:00 AM

Email ThisBlogThis!Share to TwitterShare to FacebookShare to Pinterest
Labels: Angela Ackerman, conflict in settings, how to add conflict to a story, story conflict, The Conflict Thesaurus

Thanks so much for having me here to nerd out about conflict and the setting. This pairing is MAGIC. :)

Thank you for sharing your insights into the writing craft, Angela! I love your books!

Aw, thank you, Tyrean! I am so glad our guides are helping you!

That's a lot of ways setting can increase the conflict.

The setting is awesome. We can do so much with it!

I had never really thought about weather or a crowd as the setting. Those are some excellent tweaks to story I was overlooking. Thanks for the post!

So many great ideas in one post, loved it.

Elizabeth, Juneta and Rere, thanks for commenting. It's true, there's a mother lode of opportunity found in the setting, and I'm so glad this post gave you a few ideas!

I can't thank you enough for this - I'm better on dialogue than setting, and this should make the book I'm working on POP!