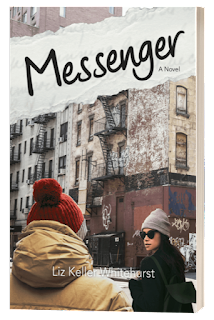 “Hope is the hardest love we carry.” –Jane Hirschfield

Spring, 2020. The Covid epidemic surging. I awoke the morning before my birthday with a clear and urgent message: my novel, Messenger, had to get out to people—to bring them hope. Now! But how? My talented agent had pitched it to numerous editors during fall, 2019, with many reads but no takers. With lockdown and businesses grinding to a halt, there had to be another way.

Messenger tells the story of a mysterious woman giving life-changing messages to people all over New York City and Alana, the young journalist who seeks to tell her story. As Alana soon learns, you pay attention to messages—take them seriously. I took my message very seriously indeed!

My first idea was to create a website or blog, because I knew I wanted the story to be free and easily accessible.  I also had the idea of a serial—releasing a portion of the novel each week—to build momentum.

By then everyone’s eyes were already fried with 24/7 screen time and Zoom meetings galore. Podcasts were a welcome relief. When Rachel, an experienced podcast producer and voice actor, offered to narrate, it was a done deal!

Messenger, the novel’s mysterious main character, not only delivers life-changing messages to random people but the key to these messages is always timing.

Timing was also crucial to the birth of MESSENGER: A Podcast in 16 Episodes. Rachel had relationships with Wells Hanley, a musician and Wells had a relationship with Lance Koehler, from a local recording studio. Also, I knew a designer, Brandon O’Neill, a talented graphic artist as well as a musician with experience creating podcasts. Lucky for MESSENGER, all these local Creatives had the time and talents needed to make the podcast a success.

The power of connection is another major theme of Messenger’s story. As the plot unfolds, Messenger teaches Alana the deep and mysterious level at which we are all connected—whether we realize it or not. In fact, Messenger tells Alana the greatest illusion you can hold is that you’re alone because that’s something you can never be. These connections have the potential not only to save us but to propel us forward into a bright future.

Would our podcast have the power to connect people in a meaningful way? My goals for MESSENGER: A Novel in 16 Episodes were the same as for the novel—to comfort, encourage, motivate, and inspire my listeners/readers. To provide perspective and hope. To connect people and to keep them company during this most challenging time.

Just three months after I received the message to get MESSENGER out, we launched the podcast on a beautiful podcast website designed and maintained by Brandon O’Neill (oneillcreativeco.com), narrated and produced by Rachel Pater (pater.rachel@gmail.com), with original music by Wells Hanley (wellshanley@gmail.com), and recorded by Lance Koehler (minimumwagerecording@yahoo.com). We released one episode a week for 16 weeks, including two bonus episodes. 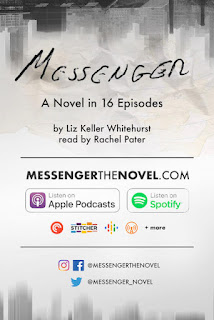 Messenger tells Alana we can all be messengers for each other. Anyone can do it. To build connection, I wanted to involve listeners in the story and its characters, and to encourage them to pay attention to their own lives. I hoped they’d share messages they’d received from unexpected sources and would ask themselves when and where they could be messengers for others.

One listener told me she hadn’t received a message yet but was watching and listening. Another said she’d received what felt like messages in the past, but found they were multiplying because she now noticed rather than dismissed them as coincidence. Many listeners reported they fell asleep listening to MESSENGER (a compliment). One loyal listener falls asleep to an episode, then in the morning finds she receives an appropriate message for the day.

Listeners were so generous in sharing real-life messages they’d received from unexpected sources. Some of their messages came from others—some strangers, some friends. Some received internal messages—as I did. For some, the messages came from loved ones from the other side. For one woman, a strange little boy on the playground delivered a message that set her mind at ease about her daughter’s upcoming heart surgery. A friend gave one listener valuable advice just in the nick of time. And an apartment resident’s unexpected welcome let another listener know she’d found her new home.

We featured many of these real-life messages on two bonus episodes.

By the time the last episode dropped late October 2020, we’d gathered a strong core of listeners and more were joining each week. Word of mouth, social media presence, and our well-designed and informative podcast platform and liner notes built interest. I attended virtual Book Club meetings featuring MESSENGER. Our Simplecast platform soon revealed that people all over the world were downloading Messenger.

At a time of isolation, confusion, and change, MESSENGER gave people a message of hope to look forward to each week, plus the soothing effect of listening to a story read out loud. MESSENGER: A Podcast in 16 Episodes serves to do what a dear friend says is our primary purpose here on Planet Earth—we’re just here to walk each other home.

Even though Messenger found a print publisher and the book debuted in October 2021, the entire podcast is still up, still free, and gaining new listeners globally.

Find it wherever you get your podcasts or on my website: lizkellerwhitehurst.com. 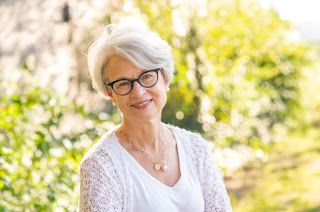 Liz Keller Whitehurst is the author of her debut novel, Messenger, and author/creator of the serial podcast MESSENGER: A NOVEL IN 16 EPISODES, which she launched in 2020. Her short stories have appeared in many literary magazines and journals, including Gargoyle, The Portland Review, Five Fingers Review and Nimrod International Journal. She was a finalist in Nimrod International Journal’s Short Story Competition. She earned an MA in English from The University of Virginia. In addition to fiction writing, Liz has spent her professional life writing and teaching. She’s done corporate, non-profit and freelance writing and has taught English and writing at Virginia Commonwealth University, University of Richmond and J. Sargeant Reynolds Community College. Her last teaching post was co-leading a memoir writing class at the city jail. Though born in Ohio, Liz grew up in Winchester, Virginia and has lived her adult life in Richmond, Virginia. She shares her current 1891 home, located in one of Richmond’s oldest neighborhoods, with her husband. Her second-floor writing desk overlooks the James River.

Email ThisBlogThis!Share to TwitterShare to FacebookShare to Pinterest
Labels: building a podcast following, connecting to readers through podcasts, how to start a writer podcast, Liz Keller Whitehurst

Thanks for sharing with us, Liz!

What a gift! (And a great idea!) Headed to my podcast app right now.

Very interesting and really exciting to hear the podcast is still garnering listeners.

You should be so proud of yourself to help so many people with your messages... Congrats on the book and I hope it's a bestseller!

This is a wonderful story, thank you for sharing and so glad you listened to your message!

What a fascinating idea, Liz. Your approach to getting your book out to the reading public is so brilliant. Best of luck to you.