Thoughts on Being a Hybrid Writer by Elizabeth S. Craig

Pros for being a hybrid writer:

I received a solid introduction to my genre’s readers and some name recognition from being traditionally published that helped readers find my self-published books.

I received free editing from (usually) skilled editors as a traditionally-published writer. What we learn from them can help us write better books.

Being traditionally published means distribution to physical bookstores and libraries and the chance to connect with readers who don’t use e-readers (to me, this is becoming less-important as more readers go digital).

Since traditional production can take as long as a year or more, this makes a good opportunity to write a self-published book.

The times I’ve been invited to speak at libraries or conferences or other events, Elizabeth the Trad-Published Writer is usually the one who is invited. It annoys me, but frequently I sell my self-pubbed books alongside the trad-pubbed ones after the event.

If we’re not yet published, becoming a traditionally published author means a time-consuming process of querying (agents and/or publishers), rejections, contract negotiation, and a long production period usually spanning the length of a year.

Traditionally-published projects can and do interrupt self-pub projects because deadlines are in the contracts.

We have no control over the finished project for traditionally published books.  We have little input on covers, formatting, whether DRM is on the digital books, print runs, etc.

Ways to make it work:

If you’re writing series and switching back and forth between series, consider outlining the next book in the series as soon as you’ve finished a book in that series (and while your mind is still in that story world).

Be somewhat vague about the release dates of your self-published books.  There can be delays from interruptions by the trad-pub production schedule.  Better to say “to release fall 2015” instead of “October 1, 2015.”

Newsletters inform readers of our traditionally published books that we have other, self-published, books.

Some of the profit from self-publishing results from getting our books on as many platforms as we possibly can.  It can be tough to juggle two or more series and we need to make sure our content is working as hard for us as it can.  Explore audio (through ACX), print (CreateSpace and Lightning Source are two popular print platforms), and ebook retailers beyond Amazon.

Be diligent with your trad-published contract.  Search for non-compete terms, which attempt to shut down self-publishing.  If you have an agent, you still need to read your contract to make sure that these phrases aren’t in there.

A reminder:  If you go the hybrid writer route, you don’t always have to stay a hybrid.  If you feel you’ve gotten all you need from the experience, you could stop pitching publishers and just continue self-publishing.

Are you traditionally published? Self-published?  Both?  How do you make it all come together? 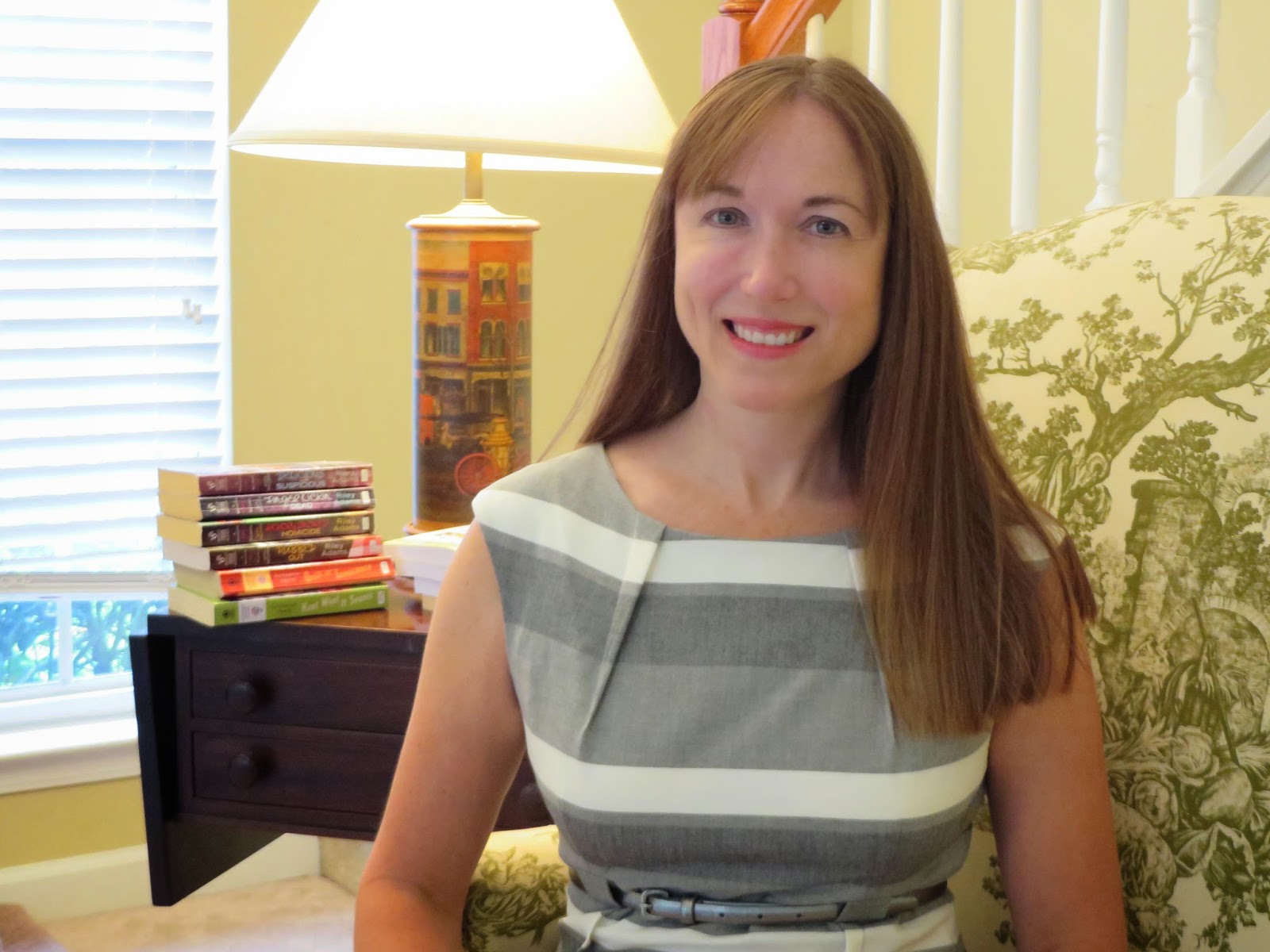 Elizabeth writes the Southern Quilting mysteries for Penguin/NAL, the Memphis Barbeque mysteries for Penguin/Berkley, and the Myrtle Clover series for Midnight Ink and independently.  She blogs at ElizabethSpannCraig.com/blog.  Elizabeth makes her home in Matthews, North Carolina, with her husband and two teenage children.
Posted by Alex J. Cavanaugh at 5:00 AM

Email ThisBlogThis!Share to TwitterShare to FacebookShare to Pinterest
Labels: balancing traditional and self publishing, Elizabeth S. Craig, Pros and cons on being a hybrid writer

Thanks for hosting me, Alex!

Alex - Thanks for hosting Elizabeth.

Elizabeth - Thanks for sharing the ways you make hybrid publishing work. It is tricky and I think it takes real awareness on the part of the author. But it opens up a lot of new possibilities, and as the publishing world changes, it's good to be flexible like that.

Margot--You're so right--a writer needs to come into a hybrid publishing approach very carefully...especially in terms of contracts and rights. Thanks so much for coming by today!

That is sneaky if publishers are adding things in the contract restricting an author from self-publishing. You'd definitely want to watch for that.

I had no idea I was a hybrid writer. I'm back trying to find a traditional publisher because of time constraints and money. It's expensive doing this yourself especially if you're not American. Great post, Elizabeth. It is so important to not only read the contract, but understand it.

Elizabeth, I have published two books and working on #3 in a series, and the first two are self-published. I'm thinking I should find an agent for #3, but now I'm not sure that is the wisest thing to do. I use AuthorHouse and am very satisfied with them. I do have my own cover designer and editor, both of whom have done a great job for me. Then I send the entire package to AuthorHouse for the publishing.

Excellent post! As a hybrid writer, I agree with those pros and cons. I love the control I have over my indie published works, but it's nice to have help in marketing with the traditional publisher. Using both together will hopefully expand my audience.

This ties in perfectly with the post I wrote for tomorrow on Patricia Stoltey's blog. Many of my author friends are hybrid writers and are very happy with it.

Kind of a not putting ones eggs in one basket sort of concept I guess. I think it's a good idea to be a hybrid writer.

Arlee Bird
A to Z Challenge Co-host
Tossing It Out

Have to be sure and read that fine print indeed. The time consuming part is what turned me off traditional

Diane--I've seen it myself....it's amazing what can get stuck in even a boiler-plate contract.

Joylene--Good luck with the process! And you're right...nice not to have the initial outlay of cash when we go through trad pub.

Linda--Congratulations on your books! You know, you've done well without an agent and it sounds as if it's working out well with AuthorHouse. If you felt later that you *did* need an agent....say if you were interested in selling your foreign rights and didn't want the time-investment involved...you could always approach one for that one specific area.

ChemistKen--Exactly! As it is, I just had a reader email me last night and ask precisely what I meant by "spring 2015." :)

Christine--I bet it will! Good luck to you.

Susan--I am, too. I will say that there may come a time when I may not really need the push that trad pub gives me...and then I'll go totally solo.

Arlee--Yes, and that's a good concept even for those who strictly self-pub (not limiting oneself to just Kindle, for example, but branching out into Nook, Smashwords, Kobo, etc.

Pat--Always good to read that fine print, for sure. Thanks so much for stopping by.

It’s tax filing season and so a big picture financial view is in my mind. Which is probably why, as I read this great post from you, I think of the importance of diversifying your investments. It applies, of course to owning stocks and bonds, and rental property, etc., but it applies equally to our marketplace situation as authors. None of us know the future, and it’s good to have several things working--hybrid publishing options, multiple channels of distribution, several series, perhaps even writing (in time) for several audiences in different genres. Anyway, thanks for the stimulating post.

Ryan--I think, as in the financial world, that's the absolutely *safest* approach. Diversifying to reduce risk. I think, if we're writers with a commercial mindset, the smartest thing we can do is publish on a multitude of different platforms and reach different audiences through genre diversification.

Outside of the blogging world, I am not published...yet. :O) When I interview an author for a blog book tour, I usually ask an 'indie vs traditional publishing' question. I am glad there are so many more choices for authors these days. I feel after reading your post, it makes even more sense to me now, that I understand the differences, the pros and cons of both routes better. Thank you!

LuAnn--I'm so glad the post helped. You're right...there are so many good choices for us. Best wishes for your writing and thanks for coming by!

I've never thought about it this way, so I appreciate your insight. I am both self and traditionally published, and still have much to learn. :) Thanks so much for your thoughts!

Excellent post and very informational! I'm self-pubbed with a small press traditional book in the loop (just e-mailed the final draft yesterday) so I'm headed down the hybrid path. Thanks for all the great info on scheduling projects and keeping the choices open!

Tyrean--Good luck with your small press book! And thanks.

It just struck me now: within the unique context of being a hybrid writer, imagine the tons of knowledge and experience that accumulates?
It's almost like having the best of both worlds...?
A great post! Thank you Elizabeth!

That's interesting. I expected a hybrid writer would be someone that wrote both fiction and non-fiction. Or poetry by night and very boring technical writing during the day.

Michelle--I'm sort of an information junkie, so I've definitely enjoyed that part of the experience! And thanks.

Tonja--Ha! I think I like those definitions better. :) I guess, instead, we'd just call those 'prolific writers.'

I'm sort of taken with the idea of a writer who dabbles in poetry at night and boring technical stuff for the day job. Maybe that would make a good story....

I guess I'm in that hybrid category with you. My young adult books have all be traditionally published, but my middle grade, I've done on my own. I've enjoyed both experiences, although being independent has strong appeal because I can do whatever I want whenever I want. The best part of being a writer these days is all the freedom to choose.

Great post about being a hybrid author, its pros and cons. It made me realize that I'm aiming towards the path of an hybrid author. I've self-published a poetry chapbook on Smashwords and I'm thinking of continuing self-publishing but only the shorter works, eg poetry and short story collections. And maybe stand alone books. I'm thinking of querying small to mid presses and publishers book series. I haven't finalized any decisions yet.

Clee--You are, indeed! I've enjoyed both too, although I agree with you that being independent is my favorite.

Lidy--It sounds as if you're covering your bases really thoroughly. And you'll have the flexibility as a hybrid writer to create more visibility for all your books by carefully pricing your indie titles.

Hi Elizabeth - it sounds like it definitely works if you know exactly where you are .. and are on top of your writing and all the various angles ... I can quite see where you're coming from. Great post as with the comments we're getting a good overview of what's what ... cheers Hilary

I haven't heard it put quite this way and appreciate your take on this. I like the pros and cons, hearing them out loud like that was good. Thanks for posting this!

Hilary--Thanks. And thanks so much for coming by!

Lisa--Hope it helps. And thanks!

Peaches--So glad you found it helpful. Thanks!