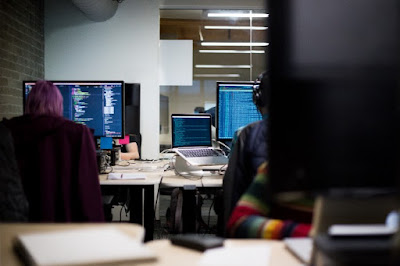 Photo by Hack Capital on Unsplash

Active listening as a 911 Dispatcher taught me to listen with attention, so I know the right questions to ask when listening on the phone, listening to clients, or listening to my characters.

The role of a 9-1-1 Emergency Dispatcher and Call Taker is as a first responder. They are the first line of assistance to anyone calling on the phone for help. They are the only link to help and information available to the caller in the middle of a crisis and the emergency units responding.

In that position, you only know what you are told or can hear. Obtaining priority information is important to the safety of all, and to a quick response. People in crisis often do not know what to do, or what to tell you so you can help them. It is all dependent on the call taker asking the right questions to obtain vital information.

I worked in 9-1-1 public safety telecommunications for twenty-three years. One of the skills you acquire is active listening. Active listening is more than just hearing what is said; it is understanding the undertones of what is spoken and reaching the right conclusions.

In emergency situations, interpreting the background sounds provides a lot of information that can’t be spoken, but you can hear it. That information might tell where the person is who has no idea where they are such as a child, or injured person or a lost visitor in your city.

Background sounds can reveal misinformation and lies by the sounds you hear when talking to people, which is a trick you can use when telling your stories. Those background sounds might reveal where an active shooter is within a large building when the caller can’t tell you.

Getting creative with this technique is a terrific way to reveal character, setting, and situation.

One of my roles as a writer is listening to my clients talk about their stories in one-on-one coaching.

Sometimes it is not what they are saying that reveals the right question to move the story forward but how they say it, or the emotion or emphasis in their words as they talk about a situation.

Paying attention to those little nuances cue me in to the underlying problem, and the reasons they are stuck or have lost their way in the story they are trying to tell.

Just because you hear someone does not mean you are actively listening. A definition I like for the word listen is “give one's attention to a sound.” This is called active listening.

Listening with attention means not trying to second-guess what is being said to you, interpreting what you think you hear, or drawing conclusions before you have heard all the necessary information. Don’t assign the obvious by second-guessing the speaker.

Always listen to the tone and emphasis on words being said or the word choices that are made or not made when speaking. It is as much about what is not said as it is about what is said. Pay attention to phrases and repeated words.

Using the technique of having your character misunderstand or second-guess others can help you create conflict and misunderstanding in your story. Sometimes it is what is not said that is the heart of the problem.

As writers, we get overwhelmed with all our story knowledge, or world-building or character profiling, and can’t see the tree for the forest.

Yes, that is cliche, but appropriate.

Body language is a big part of active listening.

As a dispatcher and call taker, I spent a large majority of time on the phone, but we often had walk-up traffic to the dispatch window.

When talking to people in person, active listening involves watching their actions and behaviors. Pay attention to unspoken communication and even use your sense of smell in rare situations.

Learn to use unspoken communication in your writing as well. Sometimes it is the little things or the appearance of unimportant things that can tell worlds of information about a situation or a person.

For example, the smell of their breath could indicate drunkenness or sickness. Are they staggering because they are drunk or is it a medical emergency you need to have an ambulance respond to?

Are they yelling, saying inappropriate things, or cussing at you because they are in a rage or might they have Tourette's Syndrome or some other extenuating circumstance causing the behavior?

Staying calm and listening is the fastest way to help them resolve the situation taking place. Attentiveness helps you determine the best action to take in a seemingly hostile situation. It may be as simple as getting out of that person's line of vision and allowing someone else to talk to them — and yes, that happened to me.

Applying active listening to your writing.

Active listening can help you learn several things in your writing, including how to convey a lot in a single scene without excess words or info-dumping. It also can make the scenes active rather than passive, and convey character action, setting, and conflict in a more natural way.

Here are a couple of exercises you can try:

Think about the last time someone told you something while smiling but you knew that person was irritated with you. What did they look like? Use your words and senses to convey that.

Think about the last time someone told you they were fine, or they were not mad, but you knew they were. What body language did you observe that gave it away?

The next time you sit down to write, try actively listening to your characters and see what happens. The techniques you learn through listening can save you words in the writing, helping with show don’t tell.

More reading: 93% of all communication is nonverbal.

Very good point about active listening. Most people don't apply it to real life, but I never thought of applying it to my writing - thanks!

As a mere poetry writer I also think it is important yo listen.
I enjoyed reading this as it has given me ideas what to write in the future,

How great to point that out. I had never thought of that. Thanks!

Everyone should be taught a class in active listening. Maybe there would be less fights.

This is such good writing advice Juneta. Thank you for writing this.

I'm late to the party here, but I just wanted to say thanks for a different way of looking at—listening to?—things when writing. As anyone can attest to, hearing isn't the same as listening, and active listening takes it up a notch. Great tips!